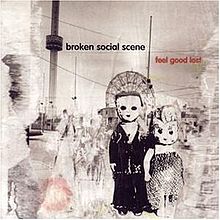 OTHER SONGS YOU MAY KNOW: That’s a big no

WHAT’S IT ALL ABOUT: A mostly instrumental (and the vocals are just ethereal really) record that’s good to put on while cleaning your bathroom, but that’s not a recommendation.

SOME WORDS, PHRASES AND CLAUSES ABOUT THIS RECORD: At first, they were an ambient instrumental group founded by Kevin Drew and Brendan Canning and they gathered some friends and recorded this record of ambient doodlings.

It’s alright if you’re into that kind of thing, but I kept waiting and waiting for something to pop out at me and give me a reason to keep going. I didn’t find it.

Obviously, they’d change up and become the big ol’ Toronto collective histpers now and nod to, but this…this isn’t it.

NOTES & MINUTIAE: The duo formed the band in 1999 and it took a couple years to get this made.

GRADE: C: Be my guest if you like ambient noise scapes.