SINGLES: None (these were two EPs)

OTHER SONGS YOU MAY KNOW: The Shah Sleeps in Lee Harvey’s Grave, Bar-B-Q Pope

WHAT’S IT ALL ABOUT: The first emittance from these weirdos from Austin is chaotic, shambling, and yet after a while it makes sense, sorta. 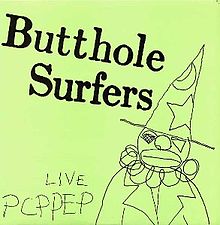 SOME WORDS, PHRASES AND CLAUSES ABOUT THIS RECORD: The first rule of Butthole Surfers is to not take them seriously. That’s kind of obvious, but most of what they do are ingenious genre parodies with unexpected twists and turns (the ending of “The Shah Sleeps in Lee Harvey’s Grave where Paul Leary just keeps yelling “shut up” in a defeated way and some people may not get that and just hear chaos and noise.

There is definite some form and structure and some definitely advanced ideas here. It’s just sifted through a lens of demented weirdness. The live EP showcases the same kind of derangement, with more saxophone from Haynes that adds to the entire stew of madness and his golf commentary on “Bar-B-Q Pope” is pure genius.

It may take a while for you to grasp this. Heck, it took me a while.

NOTES & MINUTIAE: The band had a hard time keeping drummers and bass players until they found Coffey, and later Nervosa.

IS THERE A DELUXE VERSION: There are a few bonus tracks – more live material and a demo.

GRADE: B+: I get what they’re doing, and it’s fun, but…it’s not for everyone