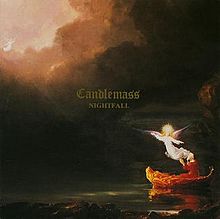 SINGLES: Samarthin, At the Gallows End

OTHER SONGS YOU MAY KNOW: Bewitched, The Well of Souls

WHAT’S IT ALL ABOUT: Finding their vocalist, Candlemass releases a classic Swedish doom metal record.

SOME WORDS, PHRASES AND CLAUSES ABOUT THIS RECORD: It didn’t take long for Messiah Marcolin to make his mark with Candlemass. The first verse of “Well of Souls” showed his power, range, and dramatics. Coupled with classic doom metal riffs, the stage was set for a doom metal classic.

Bassist Leif Edling’s songs improved from their first record as well, and the tight playing of the band, veering from pure doomy sludge to taut thrash. “The Well of Souls” was an instant classic (though not a single, for whatever reason).

The rest of the songs suffer a bit by comparison to the outstanding beginning, and there are some instrumentals to set the mood between songs (which is fine, really). The whole album coheres and it’s great for anyone who wants some dramatic doom in their life. And who doesn’t?

NOTES & MINUTIAE: Guitarist Lars Johansson broke his arm and was replaced for a few tracks by Mike Wead. Wead joined Candlemass in the 90’s.

IS THERE A DELUXE VERSION: Demos and live tracks.

GRADE A-: Just listen to the glory of “The Well of Souls” 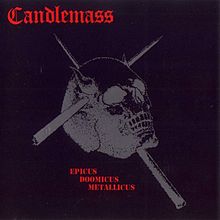 OTHER SONGS YOU MAY KNOW:  Nah

WHAT’S IT ALL ABOUT: Doomy Swedes release doom metal band, breaking some ground but losing points with a hired-off-the-street singer.

SOME WORDS, PHRASES AND CLAUSES ABOUT THIS RECORD: Instead of playing fast fast fast, Candlemass decided they would slow down, to Sabbath sludge tempo, to make their statement. Musically, it worked, as the riffs were powerful and heavy – as heavy as anything in 1986.

The problem was that they had a vision of this doom metal sung by an operating, powerful vocalist. They had trouble filling the slot and finally found Johan Langqvist to fill the slot as they recorded the album. Langqvist wasn’t quite up to the task – his vocals are flat and he doesn’t have the power and captivating voice one needs to be a singer in this kind of band.

Still, the album put Candlemass on the map, and set the stage for their next album which would turn the heads of metal fans everywhere.

NOTES & MINUTIAE: When they recorded this album, Edling was the only original member, and they had gone through three rhythm guitarists, two lead guitarists and two drummers.

IS THERE A DELUXE VERSION: Yes, a live set of the album recorded by a later version of the band.

GRADE: C+:  Historically, it’s a keeper, but the vocalist really matters for this band.