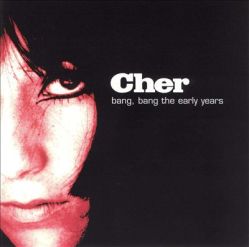 TITLE: Bang Bang: The Early Years
YEAR RELEASED: Compilation
CHART ACTION: None
SINGLES: Charting: All I Really Want to Do (#15 US, #9 UK), Where Do You Go (#25 US), Bang Bang (My Baby Shot Me Down) (#2 US, #3 UK), Alfie (#32 US), I Feel Something in the Air (#43 UK), Sunny (#32 UK), Behind the Door (#97 US), Mama (When My Dollies Have Babies) (#124 US), Hey Joe (#94 US), You Better Sit Down Kids (#9 US)
OTHER SONGS YOU MAY KNOW: Covers of You Don’t Have to Say You Love Me, Needles and Pins, Elusive Butterfly
LINEUP: Cher (or Cherilyn Sarkisian Bono Allman), Sonny Bono, The Wrecking Crew
WHAT’S IT ALL ABOUT: Early solo hits from Cher, produced by her then-husband with songs written by him or other well-known writers. All of this material was released from 1965-67, before she hit her first commercial dry spell.

SOME WORDS, PHRASES AND CLAUSES ABOUT THIS RECORD: Compiling a compilation of Cher is daunting, thanks to the various licenses and record companies involved. Sonny & Cher were on one label (Atco) and Cher herself was on another label entirely (Imperial). She later moved to Kapp / MCA, then Casablanca, then Columbia, then Geffen, and finally Warner Brothers. So licensing is not going to be easy. However, there are several collections that take good chunks out of the catalog.

This one collects singles and album cuts from her first era of hit singles, stretching from 1965-67, and ignoring the record she made for Imperial in 1968 that stiffed with no hits. The arrangements are standard Wrecking Crew brilliance, and the material is well suited for her somewhat limited voice and range.

The songs were pretty revolutionary for a female pop singer at the time – touching on divorce, pregnancy and other taboo topics. I came into this not expecting much, really, but it’s a decent album where I’m only exiling a few of tracks that didn’t really work.

NOTES & MINUTIAE: The version of “Alfie” is seen over the closing credits of the movie, but is not the most popular version (that was by Dionne Warwick).

IS THERE A DELUXE VERSION: No. This is the best collection for early Cher. There are longer collections but those have fluff, and there’s just a couple of regular albums out there that also are filler full.

GRADE: B: The production is darn good, as you thought it would be. The material is pretty good and just a few cuts don’t pass muster.