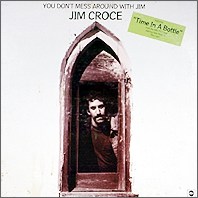 TITLE: You Don’t Mess Around With Jim
YEAR RELEASED: 1972
CHART ACTION: #1
SINGLES: You Don’t Mess Around With Jim (#8), Operator (That’s Not the Way It Feels) (#17), Time in a Bottle (#1)
OTHER SONGS YOU MAY KNOW: Box #10.
LINEUP: Jim Croce, Maury Muehleisen, Tommy West, Gary Chester
WHAT’S IT ALL ABOUT: Folk rock singer gives the music industry one last chance, and hits it big, and how.

SOME WORDS, PHRASES AND CLAUSES ABOUT THIS RECORD: He’d been kicking around since the mid-60’s and he and his wife actually got to make one record for Capitol, but that went nowhere. So after settling in Philly and selling radio ads, he hooked up with a music producer and Muehleisen and started to gig.

Connections led him to ABC Records, and this record which became a big hit, and a well-deserved one. It’s not just a man and his guitar singing melancholy songs – the production is varied and many songs have a sense of humor and are up tempo even if they are a bit of a shaggy dog story. He went through a lot in his life getting to this point, and there’s no reason not to sing about it.

NOTES & MINUTIAE: When he and his wife left New York, they sold everything but one guitar and returned to Pennsylvania.

IS THERE A DELUXE VERSION: No – he didn’t leave a lot of unreleased material.

GRADE: A-: Terry Cashman’s production was solid, and kept the listener interested by alternating tempos and moods, and Croce had a great gift of melody and storytelling.