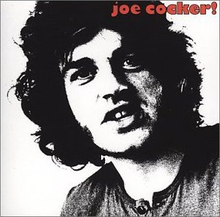 WHAT’S IT ALL ABOUT: Joe Cocker and the Grease Band (with friends) release an album hot on the heels of Woodstock, and it’s filled with great interpretations again.

SOME WORDS, PHRASES AND CLAUSES ABOUT THIS RECORD: Starting off with a Dylan cover, then going to Leonard Cohen, Lloyd Price and the Beatles, Joe Cocker’s second album is as strong and fearless as his first. He’s not afraid to add his own unique voice and interpretations to songs that folks already know well.

On the second side, his cover of “Something” is transcendent, but it’s the original (from the pen of Leon Russell) “Delta Lady” that gives the album its signature. The funky tune sounds like it came from New Orleans, and gave Rita Coolidge her nickname as well.

A couple of cuts sag a little bit, so it’s not as strong as his debut, but it’s still mighty fine.

NOTES & MINUTIAE: After this album, he broke up the Grease Band, as he didn’t want to tour. Then, they threw money at him the next year to go on the road.

IS THERE A DELUXE VERSION: Yes, a couple of outtakes.

GRADE: A-: Most every song is a great one – fantastic singing and arrangements.

TITLE: With a Little Help from My Friends
YEAR RELEASED: 1969
CHART ACTION: #35 US, #29 UK
SINGLES: Marjorine (#48 UK), With a Little Help from My Friends (#1 UK, #68 US), Feeling Alright (#69 US)
OTHER SONGS YOU MAY KNOW: He coveres some great songs that you know.
LINEUP: Joe Cocker, Chris Stanton, Jimmy Page, Henry McCullough, and many others
WHAT’S IT ALL ABOUT: First album from English blues, soul and rock song interpreter that made him (along with his iconic Woodstock performance) a sensation.

SOME WORDS, PHRASES AND CLAUSES ABOUT THIS RECORD: Joe Cocker had been kicking around the fringes of the UK music scene for a few years, but once he hooked up with Chris Stanton and formed the Grease Band he got noticed. One single followed, then a move to London, then an album.

His unique vocal stylings and interpretations made him a favorite of many UK musicians, and this album shows why. He pours it all out on well-chosen songs and a few originals. He was not afraid to cover anyone – the Beatles, Dylan, Traffic, the Animals, and even standards.

The sessions were full of pros (plus Grease band members Stanton and McCullough) that knew exactly what each song needed – it was definitely the UK version of the Wrecking Crew. Denny Cordell’s production was spot-on as well.

Cocker’s later career involved maudlin ballads and he’s maybe best known for John Belushi’s manic impression of him, but this record, at least, shows that he was the real deal.

NOTES & MINUTIAE: Cocker released a cover of “I’ll Cry Instead” by the Beatles in 1964, and when that stiffed he quit music for a year.

IS THERE A DELUXE VERSION: A couple of B-sides added to the end.

GRADE: A: Cocker has his way with songs that are unique and powerful, and Cordell’s production and arrangements complement him well. This is great and holds up now.