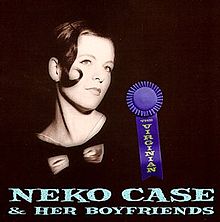 OTHER SONGS YOU MAY KNOW: She covers the Everly Brothers, Queen(!), and others

WHAT’S IT ALL ABOUT: First album by the indie singer finds her firmly in country territory, which suits her voice well.

SOME WORDS, PHRASES AND CLAUSES ABOUT THIS RECORD: After a stretch of singing in both country and punk bands in Vancouver (where she went to art school), Neko Case recorded her solo debut, a firmly country album that spotlights her vocals and her songwriting, along with some tasty covers (including “Misfire” by Queen – go figure).

There’s a definite country polish to a lot of these tracks, even if many of the players weren’t really known for country music. Case herself had recorded in a punk band in 1996. A couple of the covers and non-Case originals don’t work as well as the other tracks.
Case’s songwriting and singing carry the day, and it’s tracks like “High on Cruel” that would define Case in this era.

NOTES & MINUTIAE: They recorded a video for “Timber” but CMT didn’t want to play it, and Case didn’t like it either.

GRADE: B+: A good start to a fantastic career.