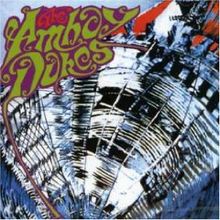 OTHER SONGS YOU MAY KNOW: They cover I Feel Free and Let’s Go Get Stoned

WHAT’S IT ALL ABOUT: Detroit garage / psychedelic rock stuck out from the usual hippy/dippy psychedelic crowd thanks to Ted Nugent.

SOME WORDS, PHRASES AND CLAUSES ABOUT THIS RECORD: Starting with a frenetic cover of “Baby Please Don’t Go”, Detroit’s Amboy Dukes rolled through a set of covers and originals in a half psychedelic, half garage motif.

Nugent formed this band after relocating from Chicago, and found Steve Farmer, who could write lyrics and put together truly psychedelic tracks that utilized Nugent’s guitar playing. John Drake was the vocalist, and sometimes his soul-tinged vocals didn’t fit the material. One interesting point was keyboard player Rick Lorber who added some piano to the mix – not a usual garage or psych instrument and his playing adds some color to a few generic sounding tracks.

It’s a spotty record, with Nugent being the star as his guitar prowess was already shining through. They do sound like they’re having fun – but psychedelic weirdness like “Psalms of Aftermath” are rather dated and tiresome. However, they’ve got a depth of tracks that many other younger garage bands didn’t have.

NOTES & MINUTIAE: Mainstream was a jazz label that decided to take an interest in rock at this time, and the Amboy Dukes was one of their first signings.

IS THERE A DELUXE VERSION: Yes, with a couple of spare tracks.

GRADE B-: It’s pretty decent for what it is, and Nugent adds a couple of points as well with his guitar work.