OTHER SONGS YOU MAY KNOW: The Night They Drove Old Dixie Down, King Harvest (Has Surely Come), Across the Great Divide

WHAT’S IT ALL ABOUT: When people think of “Americana” music, they think of this album, and for good reason.

SOME WORDS, PHRASES AND CLAUSES ABOUT THIS RECORD: A trip through the past may not have been the thing that many in the 60’s thought they wanted, but when the Band came out with this album, many realized it was what they needed.

Writing songs about people from the past, using old-time arrangements, but also utilizing modern rock-and-roll flourishes (including the fantastic clavinet with wah-wah pedal on “Up on Cripple Creek”), the Band’s masterpiece evokes the past and stands the test of time. It sound fresh and fun all these years forward.

The songs by Robbie Robertson (he wrote or co-wrote all of them) are strong, but the arrangements and vocals by the entire group are fantastic, perfectly encapsulating each song. The group split vocals between Levon Helm, Rick Danko and Richard Manuel perfectly according to their vocal strengths. The use of Danko’s quivering tenor is especially evocative on the songs he sings.

Some songs do take a while to sink in – the moodier, quieter songs like “Whispering Pines”, or the unusual like “Jawbone” (that song is mostly in 6/4, which ain’t normal) are examples – but this is an album that fans of every genre should have. It celebrates American music.

NOTES & MINUTIAE: One of the best episodes of Classic Albums tackles this one.

IS THERE A DELUXE VERSION: Yes, an outtake that should have been on the album except for time, and alternate cuts.

GRADE: A+:  Noting that a few songs take time to sink in because of the immediacy of many cuts, this is one of THE classic albums in the rock genre. 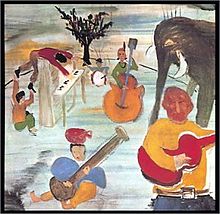 TITLE: Music from Big Pink
YEAR RELEASED: 1968
CHART ACTION: #30
SINGLES: The Weight (#63 US, #21 UK)
OTHER SONGS YOU MAY KNOW: Tears of Rage, Long Black Veil, This Wheel’s on Fire, I Shall Be Released
LINEUP: Rick Danko, Levon Helm, Garth Hudson, Richard Manuel, Robbie Robertson
WHAT’S IT ALL ABOUT: Dylan’s famous backing band and Basement Tapes collaborators record their first album as a stand-alone unit, and it’s a quite impressive blend of styles.

SOME WORDS, PHRASES AND CLAUSES ABOUT THIS RECORD: Everyone in the biz knew about The Basement Tapes (a series of famous Dylan demos that later became a record on its own), and there was a clamor to get his backing band in the studio.

Having spent countless hours on the road as backing musicians and also cutting a few random singles, they had a wealth of ideas and lots of styles up their sleeves. Manuel and Robertson were the main songwriters, but obviously everyone contributed ideas on sound and arrangement. A unique element of the group was that they employed both a piano player (Manuel) and an organist (Hudson)

Vocals rotated between the high pleading tenor of Manuel, Danko’s similar, yet gruffer voice, and Helm’s world weary country-folk stylings. That allowed a great versatility in styles and songwriting. The band is tight, the arrangements spot-on and the songs are high caliber. It’s a very rustic sounding album, one that deserved better in the marketplace at the time. Now, everyone knows it, or at least “The Weight”.

And my goodness, their version of “Long Black Veil” may be the definitive one, with apologies to Lefty Frizzell and Johnny Cash.

NOTES & MINUTIAE: While the famous “Big Pink” house is where these songs were written (and the Dylan demos recorded), the album was actually recorded in regular recording studios in New York and LA.

IS THERE A DELUXE VERSION: Yes, with nine outtakes and un-used songs, including some of their originals that were on the Basement Tapes.

GRADE: A: Everyone knows “The Weight”, the rest of the album is something everyone should know as well.