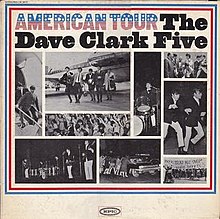 OTHER SONGS YOU MAY KNOW: Oh, no, because Dave Clark kept everything under wraps (and still does)

WHAT’S IT ALL ABOUT: A better than usual hit + filler thanks to some strong songwriting.

SOME WORDS, PHRASES AND CLAUSES ABOUT THIS RECORD: At first glance, this may be “Because” plus 11 other tracks. Not so fast.

Yeah, there are some instrumentals, but the band gets into them with great vigor. And “Come on Over” is a blatant rip of “Glad All Over”, but still stomping fun. But what makes the deep cuts special is the booming bass of Rick Huxley. His deep bass lines, unusual for the UK scene, make his sound distinctive and adds a sonic character to the tracks that the usual UK 60’s bands didn’t have. Add in Dave Clark’s booming drums.

Sure, it’s short and sometimes slight, and probably best for DC5 or beat group fanatics, but they’ll love it.

NOTES & MINUTIAE: Dave Clark has allowed some whole albums to stream. Of course, there was such a disparity between US and UK albums (the band didn’t release many UK albums until 1968, but cranked out 13 between 1964 and 1967, including four each in 1965 and 1966.

GRADE B: My sister left me this album and I played it quite a bit as a kid, because it’s right in a kid’s wheelhouse. It’s got charm and stompability. 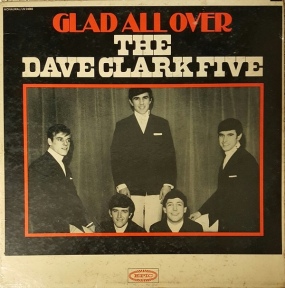 TITLE:  Glad All Over

OTHER SONGS YOU MAY KNOW:  Noooooo

WHAT’S IT ALL ABOUT: Taking advantage of their UK hits, Epic in the US releases and album with the hits, stray tracks and a couple from their UK first album. 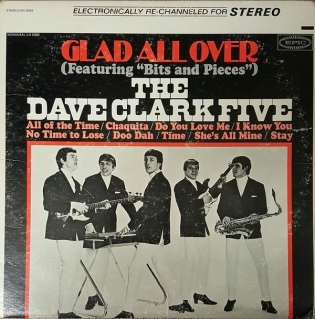 SOME WORDS, PHRASES AND CLAUSES ABOUT THIS RECORD: There’s some joy in Mudville – the Dave Clark Five has some albums streaming. Hooray!

What we have here is a typical 60’s UK / US smashup with some sub-par cuts, the singles which are gems, and a few decent album tracks. It’s a pick-and-choose kind of thing. The US record company waited to release their first UK album until after this one, which was pretty smart since this one got their momentum going in the US.

Their discography is kind of a mess since they didn’t release a lot of UK albums, but many UK singles. So reviewing the records will be interesting. However, unlike others in the 60’s I’ve heard a couple straight through so I know there’s at least two that are decent to keep as a whole.

NOTES & MINUTIAE: For years, Clark didn’t want his groups material released on CD and then not until this year digitally streaming. It’s not on Spotify, BTW. And yes, there are two covers, based on what pressing you bought.

GRADE: C:  There’s good, and there’s real bad here, but a few surprises that I like. Not saying their great, but I like ‘em at least.