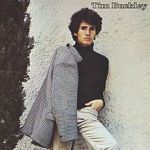 TITLE: Tim Buckley
YEAR RELEASED: 1966
CHART ACTION: None
SINGLES: Wings, Aren’t You the Girl
OTHER SONGS YOU MAY KNOW: Only if you’re a folkie
LINEUP: Tim Buckley with sessioneers Lee Underwood, Jim Fielder, Van Dyke Parks and Billy Mundi
WHAT’S IT ALL ABOUT: Debut folk-rock album from the sensitive and vocally blessed singer-songwriter shows his range and his songwriting ability.

SOME WORDS, PHRASES AND CLAUSES ABOUT THIS RECORD: Tim Buckley is a sad story – a Behind the Music case if there ever was one. This debut album shows so much promise and talent that it’s even sadder what ultimately happened to him.

The 12 cuts on this record range from ballads to mid-tempo rock. The band is excellent behind him, giving his songs the right mood and texture. Buckley seems secure in his voice, and he has maturity beyond his years in both his musicianship and his lyrics.

What’s stunning at times is his voice – the instrument that would propel him to fame. Rising above the arrangement at times, he soars and swoops. If you listen to later stuff by him, you know he’s holding back from what he actually can do. On this record, though, his restraint fits the songs.

This is where to start your Buckley collection. It’s definitely a first rate debut.

NOTES & MINUTIAE: He wrote most of these songs when he was in high school, which I find kind of amazing.

GRADE: A: An excellent debut and one to get if you like folk rock or even Jeff Buckley.