Category: A Flock of Seagulls

ARTIST: A Flock of Seagulls 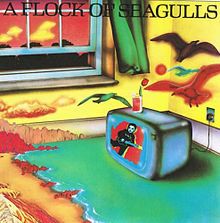 TITLE:  A Flock of Seagulls

OTHER SONGS YOU MAY KNOW: DNA has been used as a music bed.

WHAT’S IT ALL ABOUT: New wave dance rock group makes a concept record about space and the future, but no one realizes it in the US because the album was re-sequenced here.

SOME WORDS, PHRASES AND CLAUSES ABOUT THIS RECORD: A Flock of Seagulls were into space and the future. In 1982, that meant synth rock with lyrics in the Gary Numan area about alienation, human interaction with androids, and space travel. It was conceived as a concept album, but when it was released over here, Arista resequenced it for better flow, and it worked.

MTV was the hero for the band. They may have been stuck on the dance club floor, like New Order and others, but the video for “I Ran” got great play even though it looked like it was made for five dollars. The other tracks had the same feel for the most part, and almost all of the tracks had the same spacy sound and other worldly feel. The star isn’t Mike Score’s hair, it’s Reynolds’ interesting, spacey guitar work.

Only a couple tracks weren’t so hot, and the album closer “Man Made”, while probably important for the old concept, ended things on kind of a dull, boring note. Still, it’s a lot better album than you’d think with their reputation being as it is.

NOTES & MINUTIAE: One song, “Tokyo”, was left off the US version entirely. It’s not really missed.

IS THERE A DELUXE VERSION:  A version with some B-sides exists.

GRADE: B+: Most of the album is pretty good, with a similar vibe to the singles and neat guitar sounds.