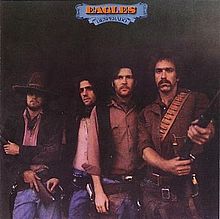 OTHER SONGS YOU MAY KNOW: Desperado

WHAT’S IT ALL ABOUT: “Concept”-like album about outlaws mostly succeeds when it stays truer to a country-rock vision.

SOME WORDS, PHRASES AND CLAUSES ABOUT THIS RECORD: The title cut, one of the most played songs by the Eagles, was never a single. The album, known far and wide, was a slow seller and the deep cuts forgotten since they weren’t on the hits collections. Thus the ironies of groups defined by compilations.

The relative failures of the two singles meant that the band relied on FM radio and touring to build momentum, and it slowly but surely paid off. Perhaps the public wasn’t ready for a lot of country-rock stylings (as good as they were), and definitely Asylum Records misfired by selecting the rocking but kinda generic “Outlaw Man” as a single instead of “Desperado”.

Bernie Leadon’s contributions are pleasantly mellow country-rock, and Randy Meisner’s “Certain Kind of Fool” is a definite highlight. However, this does contain a Glenn Frey song that’s absolutely out of step with the record and probably shouldn’t have been released.

NOTES & MINUTIAE: Director Sam Peckinpah did try to use the album as the basis of a film, but it didn’t come to pass.

GRADE: B:  Most of the songs are good, not great, and there’s one big black mark on this album. Erase that track, and it’s on par with their debut. 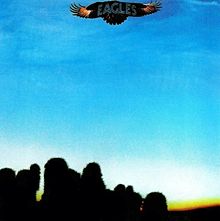 OTHER SONGS YOU MAY KNOW: If you love deep cuts, yes, but nothing else really made a peep on the radio.

WHAT’S IT ALL ABOUT: Quartet with industry experience (mostly being on the wrong end of commercial success) coalesces around a country-rock sound that launches a sound and a career..

SOME WORDS, PHRASES AND CLAUSES ABOUT THIS RECORD: The foursome who formed the original Eagles all had experience in the music industry in country-rock. Leadon had the most credibility, with stints in the Dillard/Clark Experience and the Flying Burrito Brothers. Meisner was originally in Poco and later was with Rick Nelson’s Stone Canyon band. Henley and Frey were in bands that no one really heard of, but all were backing Linda Ronstadt in 1971 when they decided to join forces.

The result was a mix of nearly straight country, rock with country influences, and straight rock. You’ve heard the hits a badillion times by now, but of the rest of the songs on the album, Leadon and Meisner really come off well. Frey’s straight rocker seem to come off forced. Leadon’s banjo defines the band, especially since it’s the instrument in “Take It Easy” that makes that song unique.

The battle between country and rock would continue through their albums. Here, their more country influences won this one – side two is the better side even if two of the hits kicked off side one.

NOTES & MINUTIAE: Meisner’s “Take the Devil” was the song that sold Glyn Johns, the producer, on the group

GRADE: B+: Sure, the hits are overplayed, I know. But there’s some pretty decent deep cuts from the Leadon / Meisner contingent.