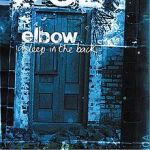 TITLE: Asleep in the Back
YEAR RELEASED: 2001
CHART ACTION: #14 UK
SINGLES: Red (#36 UK), Powder Blue (#41 UK), Newborn (#42 UK), Asleep in the Back / Coming Second (#19 UK)
OTHER SONGS YOU MAY KNOW: If you make it a habit of listening to every hyped band from Britain, you probably know this album.
LINEUP: Guy Garvey, Mark Potter, Craig Potter, Pete Turner, Richard Jupp
WHAT’S IT ALL ABOUT: Debut (and hyped) album by UK band that feels like early Genesis combined with mid-career Radiohead crossed with Coldplay a skosh.

It’s atmospheric, luxurious, slow, weary and bit over-the-top in its ornateness. If you like moods and textures in your albums this is for you. But it doesn’t seem to break out into anything memorable. The hooks aren’t there – the melodies kind of fade into each other. I keep waiting for a mid-song changeup that never arrives.

Background music for sad souls, plus Garvey can sing a bit like Tom Yorke on occasion (when he really reaches for the high notes).

NOTES & MINUTIAE: They were originally signed by Island and recorded an entire album, then were dropped. So they recorded a whole new set of songs for this.

IS THERE A DELUXE VERSION: Yes, with live cuts, EP tracks, B-sides and a DVD and probably pony rides too if you ask nicely.

GRADE: C+: It sounds good, and some tracks are good, but I don’t know if I can give a high grade to a record that gives me nap time vibes. Plus slow-mid tempo UK long and moody languishing songs aren’t really my cup of tea. I’m going to exile some of these.