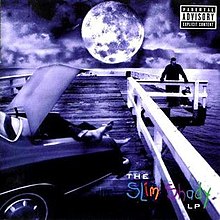 OTHER SONGS YOU MAY KNOW: 97 Bonnie & Clyde

WHAT’S IT ALL ABOUT: Eminem’s major debut establishes his Slim Shady persona to the masses.

SOME WORDS, PHRASES AND CLAUSES ABOUT THIS RECORD: Eminem had released an album and an EP to crickets (or worse) in Detroit, but thanks to participating in a battle in LA, his EP found his way to Interscope records, and to Dr. Dre. The rest…history.

This record is uncompromising, raw, brutal at times, and like nothing in the hip-hop world. Instead of glorifying his lifestyle, Eminem tells another tale – tells it how it is living in trailer park squalor working low wage jobs and just trying to scrape by and exaggerating it at times.

While Slim Shady is a character, inhabiting a cartoony world of outrageousness. There’s definitely some lyrics and themes that haven’t aged well (and didn’t go over well then), and “97 Bonnie & Clyde” is just chilling. But his flow is superb and the beats are on point. Despite the lyrics, it’s a great sounding record – just overly long.

NOTES & MINUTIAE: There were several lawsuits about this album, including his mother and a school bully.

IS THERE A DELUXE VERSION: Two bonus editions with different versions and mixes.

GRADE B+: Just a bit long, and a bit over the top.