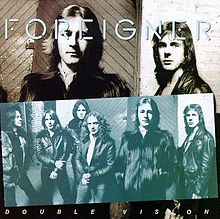 OTHER SONGS YOU MAY KNOW: Not unless you have it

WHAT’S IT ALL ABOUT: Second album cements the band as the epitome of AOR.

SOME WORDS, PHRASES AND CLAUSES ABOUT THIS RECORD: Foreigner’s second album is again top heavy, with the radio cuts overshadowing anything else. The title cut is probably their best work, with a killer guitar riff and some interesting vocals and bridges. “Hot Blooded” is a perfect summer radio song.

The rest of the cuts aren’t that bad. A couple are exile worthy – when they do ballads, they really turn up the schmaltz.  Mick Jones also sings a couple of tracks instead of Gramm. Not great.

There are a couple of tracks here that aren’t hits that are worth keeping. Just pick and choose.

NOTES & MINUTIAE: This has sold 7 million copies here in the US.

IS THERE A DELUXE VERSION: A couple of live cuts.

GRADE: B-: A few exiled. It does have “Double Vision”, which is a plus, outweighing the icky ballads.

OTHER SONGS YOU MAY KNOW:  Headknocker

WHAT’S IT ALL ABOUT: Mainstream arena rock to the hilt, with half of the songs just kind of thrown on there to make up the numbers, it seems.

SOME WORDS, PHRASES AND CLAUSES ABOUT THIS RECORD: When Spooky Tooth finally bit the dust, Mick Jones (not the guy from the Clash, mind you) formed this band with Ian McDonald, formerly of King Crimson, some UK studio guys and US vocalist Lou Gramm. The sound they were going for was geared toward mass acceptance on US radio, both Top 40 and rock stations. They succeeded on that part.

The singles you know hit that target demo right on the nose. To this day, they sound better on the radio (at least to my ears), as if that was the medium they mixed it for. The rest of the songs? Well, a couple are OK, the rest are meh as meh can be.

Don’t kid yourself, this was a band programmed to extract airplay from radio so they could extract cash from US rock fans, but it was catchy enough that it didn’t scare away pop fans. Calculating, yes? Still sound good on the radio? Sure. Can you sing the hit singles note for note? Of course. They won.

NOTES & MINUTIAE: Gramm’s former band opened for Spooky Tooth at one point and that’s how Jones and Gramm met.

IS THERE A DELUXE VERSION: Yes, some demos that really aren’t necessary (except for the one song not on the album, which sounds pretty good).

GRADE: B-. I almost put this in the “C” range because of the cold, calculated effort the band succeeded, and the meh songs. But the good songs are good enough that you probably ought to sample everything, and exile what you don’t dig. Dig?