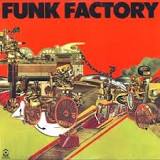 OTHER SONGS YOU MAY KNOW: Rein Ne Va Plus

WHAT’S IT ALL ABOUT: Polish jazz / funk fusionist creates a moody, atmospheric funk record that was released into apathy until the Beastie Boys found a track and sampled it.

SOME WORDS, PHRASES AND CLAUSES ABOUT THIS RECORD: Michal Urbaniek is a jazz violin virtuoso, playing a funky electric instrument. However, in the 70’s he also explored the world of funk as well, and when he relocated to New York he and singer Urzula Dudziak and others made a few records exploring this world. One was Funk Factory, which was put out and then forgotten, until…

Paul’s Boutique and the song “Car Thief”. It was just a snippet, but it was a funky little snippet. Then Rhino came out with a great box set of forgotten funk singles and tracks. Rein Ne Va Plus was on that track listing. The song the Beasties sampled. It’s five minutes of mellow funk bliss.

So I wasn’t surprised to see the record streaming. Rein Ne Va Plus is definitely a gem. The other eight tracks range from competent to pretty good. Nothing earth shattering, but you can put it on while you’re working and funk out a little bit.

NOTES & MINUTAE: I wasn’t surprised this was the work of studio pros who specialized in jazz for the most part. I was surprised that the majority of performers were Dutch or Polish.

IS THERE A DELUXE VERSION:  No. We’re lucky to have this streaming, really!
GRADE: B-: One great track, a couple of other pretty good moments, and then competence. Worth a few spins at least!