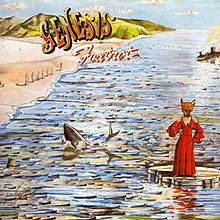 SINGLES: Watcher of the Sky

OTHER SONGS YOU MAY KNOW: Get ‘Em Out by Friday, Supper’s Ready

WHAT’S IT ALL ABOUT: Bookended by two of their better prog compositions, Foxtrot propels Genesis to high esteem in the progressive rock world.

SOME WORDS, PHRASES AND CLAUSES ABOUT THIS RECORD: From the mellotron wash of “Watcher of the Sky” to the concluding notes of “Supper’s Ready”, this album finds Genesis comfortable and confident in delivering their ornate, complex material.

Odd time signatures abound everywhere, and the lyrics are playful and storylike, drawing inspiration from Keats, ancient Norse kings, and even a spiritual encounter at Kensington Palace. The climax is “Supper’s Ready”, which over its seven movements and 23 minutes transports the listener to another realm, as long as they can follow along with the storyline.

Not everything works all of the time, which is typical for longer suites, but the the opening and closing and “Get ‘Em Out by Friday” really work, and became band and prog rock staples.

GRADE: A-:  The great pieces dominate the album and make up for the so-so pieces. 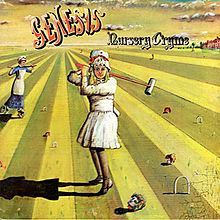 OTHER SONGS YOU MAY KNOW: The Musical Box, The Return of the Giant Hogweed.

WHAT’S IT ALL ABOUT: The first “classic” Genesis lineup forms, and records a prog album with four major pieces and three fillers.

SOME WORDS, PHRASES AND CLAUSES ABOUT THIS RECORD: The first classic Genesis lineup, the quintet, starts it’s tenure with one of the all-time classics of the Progressive Rock idom, “The Musical Box”. A 10-minute trip through a short story full of mayhem and sexuality, it showcases all of the member’s strengths and while there are slow passages, it’s not boring.

The other three major pieces fall short, though there are some interesting pieces and parts in them. I like “Seven Stones”, but the mellotron on “The Fountain of Salamacis” adds depth to their sound. The other three pieces are short fillers, probably just to ‘make up the numbers’ as it were. Though on “For Absent Friends”, Phil Collins sings his first lead for Genesis, sharing it with Gabriel.

It’s a leap from Trespass, and capitalizes on the ideas put forth in “The Knife”. Gabriel’s lyrics are obtuse, yet well-thought out. No doubt like an art student’s would be.

NOTES & MINUTIAE: Steve Hackett debuted his finger-tapping technique in “The Return of the Giant Hogweed” (listen to the intro – that’s Hackett), several years before Eddie Van Halen made his bones with it.

WHAT’S IT ALL ABOUT: First release after leaving their original benefactor finds the group exploring longer, contemplative compositions – and then there’s The Knife.

SOME WORDS, PHRASES AND CLAUSES ABOUT THIS RECORD: Genesis, with new drummer Mayhew in tow, played several gigs around London and wrote material for a cohesive album, performing longer songs in a progressive vein. Choosing the best of the lot, they recorded five tracks and then brought “The Knife” in to end it.

The other five tracks were pleasant, bland, and not exactly thrilling. “The Knife”, however, was worth the price of admission. Banks’ martial keyboards signaled a rousing affair, backed with Phillips and Rutherford on guitar and bass, and then Gabriel comes in as the rebellion leader talking words and exhorting action, while he stays back from the fray. It’s a fantastic track. Even Mayhew, a drummer who was clearly behind the others in ability, adds to it.

Had there been another effort as complete as “The Knife” this would be a must buy. Instead, while none of the other songs are bad, they’re not essential. It did give notice that Genesis was a band to watch for prog rock fans, though.

NOTES & MINUTIAE: This album went to #1 in Belgium, and they went on their first European tour in the Low Countries. That area would be strong for the band going forward

IS THERE A DELUXE VERSION:  No.

TITLE: From Genesis to Revelation
YEAR RELEASED: 1969
CHART ACTION: #170
SINGLES: The Silent Sun, Where the Sour Turns to Sweet
OTHER SONGS YOU MAY KNOW: Only if you bought it
LINEUP: Peter Gabriel, Tony Banks, Anthony Phillips, Mike Rutherford, John Silver. Chris Stewart drums on Silent Sun., Lots o’ strings and horns.
WHAT’S IT ALL ABOUT: Mostly orchestral, slightly psychedelic, slightly decent collection of songs written by a teenage Genesis. Gabriel’s vocals are on point.

SOME WORDS, PHRASES AND CLAUSES ABOUT THIS RECORD: School chums got together, wrote songs, recorded demos and sent them around. They got signed. Sounds typical, right?

Jonathan King got ahold of the demo, and picked “Silent Sun” as a single. Another single was released, and King then decided the band should create an album based on the Bible. The band was still in school, so they recorded it on holiday. King then added all the orchestras and strings and….nothing. By the time it was released the band was already moving on to longer form compositions and King released them from his grip.

It’s fairly impressive considering they weren’t quite of age yet when they produced this record and they were basically ‘forced’ to write most of the songs around a theme they didn’t pick. It’s got some really dud cuts thanks to the material. The orchestration really drowns out the group except for Banks and Gabriel (maybe Rutherford’s bass shows up at times). But Gabriel, man, he can sing, even then.

NOTES & MINUTIAE: King owns the tapes to these sessions to this day. There are about
18 songs, some demos, and single mixes out there and they’ve been repackaged ad nauseum.

IS THERE A DELUXE VERSION: Yes, demos, single mixes, etc..

GRADE: C+: It ain’t half bad for what it is. Some of it is exiled sure, and it’s rather warmed over Moody Blues, but Gabriel’s vocals can patch things over.