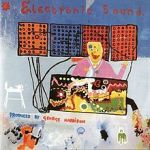 TITLE: Electronic Sound
YEAR RELEASED: 1969
CHART ACTION: #191
SINGLES: None – only 2 tracks on the thing
OTHER SONGS YOU MAY KNOW: Oh, hell no
LINEUP: George Harrison (and allegedly Bernie Krause)
WHAT’S IT ALL ABOUT: Area man buys synthesizer, records himself farting around on it.

SOME WORDS, PHRASES AND CLAUSES ABOUT THIS RECORD: While my new Moog bloops and bleeps…

This is the sound of George Harrison and his brand new Moog (and maybe Bernie Krause demonstrating the capacity of the Moog to George) and him fiddling around with it. There’s no melody, no songs, just sound.

It sounds like what I would do if I got a new synthesizer. The difference is that in 1969 they could make only one sound at a time – so George overdubbed some of this. The only reason this was released on anything but for a demonstration is that it was a Beatle that did this. Otherwise it’s just a man playing with a new toy.

NOTES & MINUTIAE: This was the second LP released on Zapple – the Apple subsidiary for avant garde music (John & Yoko released the first one on Zapple with one of their ‘recordings’.). When Allen Klein became Beatles manager he shut that shit down, pronto.

IS THERE A DELUXE VERSION: No. I don’t think we could take another track of this, really.

GRADE: D-: I don’t mind weird or odd sounds, but I do want some resemblance to a song, please.

OTHER SONGS YOU MAY KNOW: Oh, no, unless you’re a student of obscure 1968 cinema.

LINEUP: George Harrison + a lot of Indian artists and appearances by Eric Clapton, Ringo Starr and other British musicians.

WHAT’S IT ALL ABOUT: A soundtrack to a 1968 film called Wonderwall. You probably haven’t seen it. I haven’t.

SOME WORDS, PHRASES AND CLAUSES ABOUT THIS RECORD: It’s a real movie soundtrack, which means this is incidental music for the film. Harrison for the most part used Indian music for the film, and went to India to record many of the tracks using the top musicians of the country.

There are a few cuts of Western music, including a jam with Clapton, Starr and Harrison.

Since I’m not an Indian music expert, I can only assume that the Indian music is good. Again, it’s soundtrack incidental music and since I never saw the film I can’t really imagine the scenes for it. What the music did do was make me drowsy. I suppose that’s good in a way, right?

NOTES & MINUTAE: This was the first album released on Apple Records.  It was out of print for years and just popped up streaming just recently.

IS THERE A DELUXE VERSION:  Yes. They dug up a couple of tracks, and they found an alternate backing track for George’s great Beatles’ single, The Inner Light.
GRADE: C+: It’s not my bag, man. The western music cuts were just ok jams.