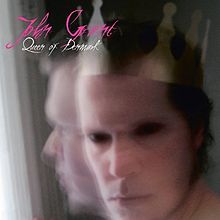 TITLE: Queen of Denmark
YEAR RELEASED: 2010
CHART ACTION: #59 UK
SINGLES: None
OTHER SONGS YOU MAY KNOW: Sinead O’Connor covered the title track
LINEUP: John Grant + Midlake and Session musicians
WHAT’S IT ALL ABOUT: Former frontman of the Czars recovers from personal crises and records a poignant and touching album about growing up gay and romance lost and found.

SOME WORDS, PHRASES AND CLAUSES ABOUT THIS RECORD: Seemingly from out of nowhere, Grant released this album on the record company that released the Czars material. The band Midlake recorded it with him in Texas, backed with session musicians adding the strings and other classical touches.

Grant has a rich baritone, which adds even more of a touch of sadness and resignation to these tales. The album doesn’t seem uplifting, and some songs do wallow in the morose side of life, but the arrangements are tremendous and that does help to lift the melancholy. There is some humor too, like in the song “Sigourney Weaver” – “I feel just like Winona Ryder / In that movie about vampires / And she couldn’t get that accent right / Neither could that other guy.”

It’s a very adult album, but the combination of song, arrangement and voice does make it accessible and inviting for serious music fans.

NOTES & MINUTIAE: After the Czars broke up, he went through a period of substance abuse, and quit music to wait tables before pulling himself out of it.

IS THERE A DELUXE VERSION: No. It’s not even streaming on Google Play or Spotify.

GRADE: A-: I wish I knew about this record in 2010. I was going through rough patches and I probably would have liked this as a companion.