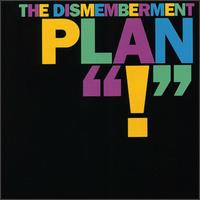 OTHER SONGS YOU MAY KNOW: Only the devoted.

WHAT’S IT ALL ABOUT: DC-area band learned its lessons well.

SOME WORDS, PHRASES AND CLAUSES ABOUT THIS RECORD: A band that definitely studied UK Post Punk and the late 80’s DC scene, The Dismemberment Plan’s debut is angular and sharp musically, and holds up decently to their later, more popular material.

Travis Morrison’s vocals are the first things that catch the ear, and his talky-singy delivery of his densely lyrical songs stand the band out a little bit from the crowd that was exploring the same kind of precise, jagged rhythms in their delivery of punk / indie / whatever you wanna call it.

Their songs are catchy despite the lack of truly melodious vocals, and they can kick up a racket. Their songs would improve – some of these do sound like filler or sound-alikes. But all in all, a good first record for an innovative band.

NOTES & MINUTIAE: The name comes from something Ned Ryerson says in Groundhog Day.

GRADE: B+: A dash of post-punk and a mix of Dischord means a decent album.