OTHER SONGS YOU MAY KNOW: Strange Days, Moonlight Drive, When the Music’s Ovder

WHAT’S IT ALL ABOUT:  After a smash hit, the Doors release an album closer to their true vision with fewer songs geared for the radio.

SOME WORDS, PHRASES AND CLAUSES ABOUT THIS RECORD: “Light My Fire” was a huge hit, of course, so radio folks may have been a little taken aback by some of the cuts on their second album.

Robby Kreiger had two somewhat traditional pop-rock songs (though “Love Me Two Times” was even more risqué than his “Light My Fire”), but “People Are Strange” (a Morrison / Kreiger collaboration) was a little more out there than the normal Top 20 hit, and “Strange Days” and “Moonlight Drive” showed Morrison’s combination of art-poetry and rock-star vibe. Plus “When the Music’s Over” is another grand opus that’s better than “The End”.

The hidden star here is bassist-for-hire Doug Lubahn, who is mixed higher this time and adds a lot to the eight tracks he’s on, especially the title track. But ee also get the first load of Jim Morrison’s horeshit in “Horse Latitudes”, which is unbearable for everyone but the most stoned.

The Doors were a good band in a fertile time for rock experimentation, but there’s nothing magical about them except their aura.

NOTES & MINUTIAE: Lubahn was asked to join the band, but declined, since he was in Clear Light and didn’t want to leave that band. That may have been a mistake on his part.

IS THERE A DELUXE VERSION: Yes, outtakes of released cuts, and just a couple.

GRADE: B+: “Horse Latitudes” is a warning for palaver to come, but most of this record is pretty solid. 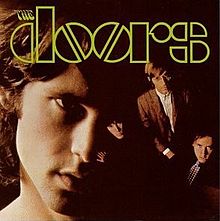 OTHER SONGS YOU MAY KNOW: The End, Soul Kitchen, Crystal Ship, Alabama Song…should I keep going?

WHAT’S IT ALL ABOUT: Hippie musicians and a bad-boy poet record some of the most definitive, and polarizing, songs of the 60’s.

SOME WORDS, PHRASES AND CLAUSES ABOUT THIS RECORD: As iconic as this record is now, it was no overnight sensation. The first single bombed (though it was brilliant) and only after “Light My Fire” was severely edited for the 45 version did the Doors take off. If that never happens, would we remember the Doors now, or would they be a mere footnote?

What we almost missed was a brilliant first side, culminating with the long version of “Light My Fire”, an excellent way to close the side. Then Morrison’s lascivious version of “Back Door Man” opens side two, and then the momentum stops. The middle of side two is decent as filler goes. At least it’s original songs as filler and not covers of the “Hully Gully” or something like that. Then we get to “The End”, literally.

Here, we have a very polarizing song, one that has had revisionist history and reviews written about it ever since it was first performed live. Many English 101 freshman essays were written about this song and about how Morrison was a real poet’s poet, or something. Manzarek and Densmore have tried to explain the song in a very hippie far-out way. To me, it’s somewhat interesting, then when it veers into Morrison ranting I just wish it WAS The End. Morrison’s poetic ramblings strike me as pretentious – as someone who took Phil 101 and a course on French poetry and then decided he was an artiste.

What Morrison really was was a performer, a showman, and a decent rock-and-roll singer who could be an effective lyricist if he was on point and concise. He was also an ugly drunk at times, but that’s another story.

NOTES & MINUTAE: As you probably know, “The End’”s profanities are censored at the end of the song, but “Break on Through” was altered to remove the word ‘high’ from ‘she gets high’ in the bridge. No one wanted anyone to get high in 1967, at least on the radio.

IS THERE A DELUXE VERSION:  No. There’s an uncensored version recently released, but you have to find it on the CD reissues from a few years ago.

GRADE:  B+: The side two filler drags the rating down a bit, and realistically, “The End “still is hard for me to slog through, especially since I rarely alter myself chemically. I do think it was used well in Apocalypse Now, though. I just don’t care for it much otherwise.