TITLE: …And His Orchestra

OTHER SONGS YOU MAY KNOW: The select few and possibly those who listen to KEXP

WHAT’S IT ALL ABOUT: Debut long-player for a long-standing Pacific NW band illustrates their power-pop charm and hooks.

SOME WORDS, PHRASES AND CLAUSES ABOUT THIS RECORD: The Fastbacks were more legendary than anything. Every write-up of the Seattle scene mentions the Fastbacks, yet until the 90’s very few heard them outside of the area even though they’d been gigging since 1981.

You can definitely tell the joy and fun they have playing. Kurt Bloch’s songs fit the group like a glove, and Kim Warnick’s vocals, while maybe not technically elite, convey the spirit of the lyrics and songs perfectly. Bloch and Lulu Gargiulo’s guitars seem sinple, but go beyond the regular three-chord monte and add some metal flourishes at time (no, really). 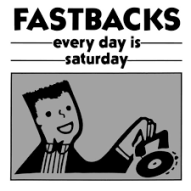 Music like this always bring a smile to my face, and it’s kind of a shame that they receded into the background as the Seattle scene became THE SCENE.

NOTES & MINUTIAE: They formed in 1979, and went through a shit-ton of drummers, including a young Duff McKagan..

IS THERE A DELUXE VERSION: Two of their early EP’s are appended at the end. Even though they’re from the mid-80’s they have the same spirit. 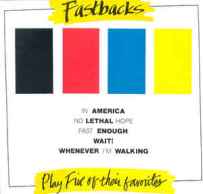 GRADE: A:  If you need a fun record that illustrates the joy of playing in a band, this is it.

SOME WORDS, PHRASES AND CLAUSES ABOUT THIS RECORD: The Fastbacks were a long-time Seattle band, starting out when many of the grungers were in high school (or middle school). They went through 15-20 drummers in their career but the main trio of Warnick, Bloch, and Gargiulo were constant.

Zucker is their first Sub Pop non-compilation release, and it combines the hooks of good pop to a punk rock sound that is mostly raw and raucous with lyrics that are quirky and sardonic at times. Bloch, the main songwriter, fills his songs with crunch and hooks.

I don’t think it’s as good as the critics at the time said it was. But, they’re an important band for Seattle and one of the first that had females at the core (even though Bloch was the defacto leader). It’s a quaint gem for a band that influenced the Seattle scene than contemporary folks remember.

NOTES & MINUTIAE: One of the first drummers to roll through the band was Duff McKagan, who of course later became the bassist for Guns ‘n’ Roses.