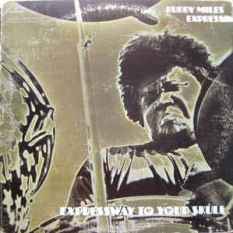 TITLE: Expressway to Your Skull

SINGLES: Train, Spot on the Wall

OTHER SONGS YOU MAY KNOW: They cover Wrap It Up

WHAT’S IT ALL ABOUT: Horn based blues, rock, and soul filling the void when the Electric Flag went kaput.

SOME WORDS, PHRASES AND CLAUSES ABOUT THIS RECORD: The Electric Flag, who paved the way for Blood, Sweat, and Tears and Chicago, had a very short life and fissioned apart quickly due to drug issues and creative scuffles. Buddy Mikes, he of the drumming chops and huge afro, became the leading voice of the Flag as time went on, and when they split he formed his own combo, the Buddy Miles Express.

They immediately got gigs, and recorded this album pretty quickly in late 1968. It was pretty standard blues rock and soul with horns. Miles really wanted Jim McCarty from the Detroit Wheels and Herb and Bill Rich, and filled in the horn section with others he knew.

While the album wasn’t a success, and was rather generic with some interesting parts, the band opened for Jimi Hendrix and Hendrix did some production work for them, and Miles joined the Band of Gypsies as well, while maintaining this band (a revolving membership to be sure).

NOTES & MINUTIAE: The followup, Electric Church, charted, but isn’t streaming. WHY? You can get the tracks on a playlist on You Tube.

GRADE B: Got some soul, rock,and blues if you need a fix.