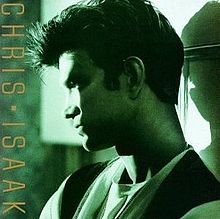 OTHER SONGS YOU MAY KNOW: This was really out of step with the radio of the time.

WHAT’S IT ALL ABOUT: More moody, somewhat twangy songs from the silky crooner that hearkens back to another time and place in rock history.

SOME WORDS, PHRASES AND CLAUSES ABOUT THIS RECORD: Hearing the vibrato on the voice, the twangy yet clean guitars, you wonder if Isaak was about 25 years too late to start his career. But the production is so crisp and clear, and the drums and bass sounds definitely belong to a more modern time, that the record is timeless – it could be released almost any time in the modern rock era.

Isaak’s voice – unique in this time – can soar like Roy Orbison’s and also evoke feeling in his lower register. One issue, a minor quibble, is that sometimes the record seems stuck in place a bit in the middle – though toward the end there’s some variety in styles.

Isaak rolls out ten originals, and a Yardbirds cover that has his imprint all over it. Most every track is a winner, and would be one you’d happy to be have come out of your speakers. The country was more about hair metal, pseudo disco and Madonna wanna-bes so moody and honest rock had a hard time in the marketplace.

NOTES & MINUTAE: “Blue Hotel” was a modest hit in France.

GRADE: A-: Another good to great record from Isaak that was ignored.

TITLE: Silvertone
YEAR RELEASED: 1985
CHART ACTION: None in the US
SINGLES: Dancin’, Gone Ridin’, Livin’ for Your Lover
OTHER SONGS YOU MAY KNOW: No. Dancin’ and Gone Ridin’ were in some soundtracks and TV shows, including the movie Blue Velvet and 90210.
LINEUP: Chris Isaak, James Calvin Wilsey, Prairie Prince, Chris Solberg with some session help
WHAT’S IT ALL ABOUT: Isaak’s debut sets the stage – moody songs powered by a guitar full of reverb, delay, vibrato and hints of pedal steel. Oh, and his distinctive voice is there from the word ‘go’, of course.

SOME WORDS, PHRASES AND CLAUSES ABOUT THIS RECORD: Isaak’s recording career established his modus operandi, that’s for sure. Moody guitar sounds with a voice of a crooner that can reach Roy Orbison tenor vibrato at the turn of a dime.

At times, this album seems almost too much like an Orbison tribute, as some of the arrangements (vocal and instrumental) sound right from the hey day of Big Roy O. However, Isaak has the chops to pull it off, especially on a song like Tears.

It’s no wonder movie and TV producers love to use his stuff – it sets a great atmosphere without being intrusive.

NOTES & MINUTIAE: Isaak was almost 30 when this was released. He graduated valedictorian from HS and went through community college and the University of Pacific in seven years.

IS THERE A DELUXE VERSION: The US version has an extra track. Yay us!