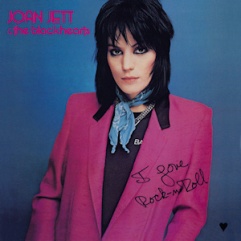 OTHER SONGS YOU MAY KNOW: Little Drummer Boy

WHAT’S IT ALL ABOUT: A cover version of a five-year old UK song became a huuuuuge hit, propelling Jett to stardom.

SOME WORDS, PHRASES AND CLAUSES ABOUT THIS RECORD: Right time, right place, right song – Joan Jett’s second album’s lead single got the airplay and distribution her earlier efforts did not.

The album itself featured a lot of covers as well, including one of her originals that she rescued from the Runaways. However, arguably the best track (the best deep cut for sure) is “Victim of Circumstance” which could definitely been a contender.

Jett and her crew gleefuly bang out these songs – simple, direct rock and roll. With the new wave and disco era in full bloom, it was a blast of rock on the radio, which was hard to find at times. It’s also a short album, with just 10 tracks lasting barely a half hour. For rock in the early 80’s, it’ll do for sure.

NOTES & MINUTIAE: The last cut was “Little Drummer Boy”, but was replaced after the first pressing by a song called “Oh, Woe Is Me”.

IS THERE A DELUXE VERSION: Yes, three extra tracks in 1992 and two more with the next release.

GRADE: B:  It’s short, and sometimes repetitive. Yet there’s a blast of rock that you need for sure.

OTHER SONGS YOU MAY KNOW: She covered Shout and Wooly Bully

LINEUP: Joan Jett, Lea Hart, Jeff Peters, Paul Simmons, and on many tracks others helped out from the UK and US.

WHAT’S IT ALL ABOUT: Former Runaway releases solo album that dies at first, then gets a second life with another record company, and later, a third life after she hit it big.

SOME WORDS, PHRASES AND CLAUSES ABOUT THIS RECORD: More of a cult performer at first, Joan Jett survived the Runaways with her head held high and with help of her producer Kenny Laguna recorded her debut album and independently released it. It was finally picked up by Boardwalk records and re-released in 1981, but still languished until Jett became a mega-star.

Jett and her band (members of the Roll-Ups, but help from others) roll through 12 tunes with fervor. “Bad Reputation” is THE highlight – just a powerful broadside against the record company machinery and public images. The rest of the songs are more energy than anything, though her cover of Gary Glitter’s “Do You Wanna Touch” has the most radio friendly sound.

It’s not pretty, not polished – just rock and roll but you know, that’s all you kind of need if you’re reaching for Jett.

NOTES & MINUTIAE: It’s finally back streaming…along with the rest of her material.

IS THERE A DELUXE VERSION: Yes, some other covers and a live cut.

GRADE: B: She don’t care about her reputation, and it shows. It’s a decent debut.