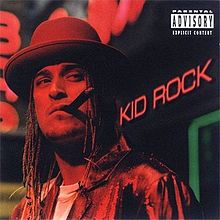 TITLE:  Devil Without a Cause

OTHER SONGS YOU MAY KNOW: Devil Without a Cause

WHAT’S IT ALL ABOUT: The fourth album by Kid Rock, after three unheard records, fuses metal, redneck culture, and hip-hop into a sometimes fun, and sometimes brilliant, stew.

SOME WORDS, PHRASES AND CLAUSES ABOUT THIS RECORD: All disparaging aside, Kid Rock blasts out full freakin’ bore on this album – as if he had THIS chance to make it big and no others.

When “I Am the Bullgod” started to hit rock radio stations, things started to turn for Kid. The came the irresistible pair of “Bawitdaba” and “Cowboy”, which are almost-perfect fusions or metal and hip-hop with other influences thrown in there for good measure.

As the record goes on, the quality slides. His ‘ballad’ is better than his later attempts, but that’s not really a praise. Only Eminem’s contribution picks up the latter half. No matter, it’s the first four tracks that make this record what it is.

NOTES & MINUTIAE: He re-recorded a lot of his earlier tracks, so I skipped those records. There just…there, really.

GRADE: B+:  It runs out of steam, but the beginning of the record is definitely one of the best fusions of metal and hip-hop.