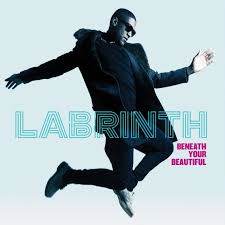 TITLE: Beneath Your Beautiful
YEAR RELEASED: 2012
CHART ACTION: #34 US (EP), #1 UK (Single). Album Electronic Earth #2 UK
SINGLES: On the US EP: Beneath Your Beautiful (above), Express Yourself (#12 UK), Let the Sun Shine (#3 UK), Earthquake (#2 UK), Treatment (#55 UK)
OTHER SONGS YOU MAY KNOW: That’s 5 of the 6 tracks there.
LINEUP: Labrinth with some production and horns and duets with Emeli Sande, Tinie Tempah and Etta Bond
WHAT’S IT ALL ABOUT: Producer and songwriter releases an EP in the US of his latest UK hit plus other UK singles to establish himself here .

SOME WORDS, PHRASES AND CLAUSES ABOUT THIS RECORD: In 2012, Labrinth released an album Electronic Earth which featured several UK singles dating back to his debut “Let the Sun Shine” in 2010. We here in the US didn’t get any of that over here until the title track of this EP was released, thanks to a performance on the UK X Factor TV Series which went a bit viral.

He’s a talented producer and has a good voice. There’s nothing really challenging about this – it’s pleasant modern pop music. Of course there are hooks. The title track shows a little more depth than his other tracks, which may have been why they chose it for a US crossover. “Earthquake” is a neat up-tempo song with effects, and of course hooks.

I am curious why Electronic Earth hasn’t been released over here but this EP gives you almost everything you’d want thus far.

NOTES & MINUTIAE: Some fans questioned the spelling of ‘your’ – it IS grammatically incorrect, but Labrinth said he wasn’t “an English GSCE”. Honest, at least.

IS THERE A DELUXE VERSION: Target’s CD version had two extra tracks.