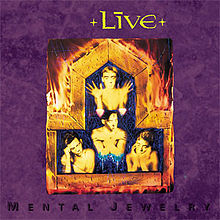 SOME WORDS, PHRASES AND CLAUSES ABOUT THIS RECORD: There’s a problem with this album, and I think it’s basically due to the material and sequencing on the album itself. The first couple of songs perk up your ears, then as you listen onward you begin to grow a bit weary of it all.

This album has a lot of spiritual undertones regarding Eastern philosophies, and while there’s nothing wrong with that it seems that almost all of the songs are roughly the same, with the same acoustic guitar, the same pleading vocals, and roughly the same backup arrangements.

The musicianship is fine, but Kowalczyk’s vocals can grate a bit after a while and it feels like he’s haranguing you instead of trying to plead with you.

NOTES & MINUTIAE: They originally released a cassette and an EP under the name Public Affection.

GRADE: B-: In small doses it’s fine. The first two cuts are pretty decent. As a whole album, though, it’s not easy or fun to really listen to without feeling guilty or preached at.