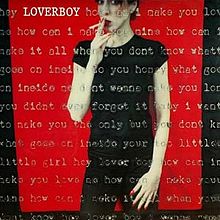 OTHER SONGS YOU MAY KNOW: Deep tracks aren’t a strong suit of Loverboy

WHAT’S IT ALL ABOUT: Mainstream Canadian rockers debut makes some waves, and positions them for an MTV career.

SOME WORDS, PHRASES AND CLAUSES ABOUT THIS RECORD: I mean, it’s Loverboy. Nostalgia for Generation X and 80’s kids, and fodder for arenas and classic rock radio.

Their debut started out strong, with the two biggest hits, and then, well, went straight to filler land. Which means songs with half-hearted hooks, lazy lyrics, 80’s synthesizers, and some showing off but always keeping it safe. Which is probably what you’d expect.

It’s not horrible by any stretch, and the filler doesn’t make you want to get up and change the station. But it’s not great art by any stretch. And I don’t think anyone will ever release a track named “Prissy Prissy” now.

NOTES & MINUTIAE: Their first gig was supporting Kiss in Calgary in 1979.

GRADE: C+:  Not really as bad as I originally thought, but the records just blah after the hits. Frankly, I wasn’t expecting that much anyway.