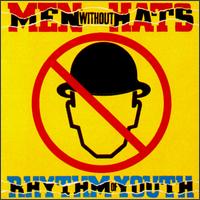 OTHER SONGS YOU MAY KNOW: Please…

WHAT’S IT ALL ABOUT: A definite relic of the early 80’s synth pop era, dominated by synthesizer arpeggios and Ivan Doroschuk’s baritone.

SOME WORDS, PHRASES AND CLAUSES ABOUT THIS RECORD: Man, nostalgia. Men Without Hats is all about that now. Then, they were just another synth-pop band with some political messaging here and there. Their first single didn’t go much of anywhere. Then, “The Safety Dance”.

That song sounded fun on the radio, and the video was a hoot on MTV, but the rest of their material wasn’t as catchy, hooky, OR fun. A lot of people bought this album, and I’m sure a lot of people weren’t too keen on anything but a cut or two.

NOTES & MINUTIAE: This went Platinum in Canada, which means it sold 100,000 copies.

IS THERE A DELUXE VERSION: Well, the UK album, US cassette and US album were all different. The version streaming is an amalgam of those with full version bonus tracks and the single mix of “The Safety Dance”.

GRADE: C: Aside from the obvious, you’ll want to be judicious on what you keep, and what you exile.