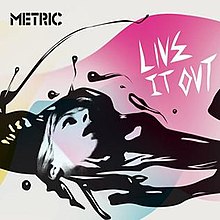 TITLE:  Live It Out

OTHER SONGS YOU MAY KNOW: Not here

SOME WORDS, PHRASES AND CLAUSES ABOUT THIS RECORD: Around this time, there was a movement of bands emulating some of the post-punk bands from the UK, and it may be tempting to throw Metric on that pile, but their mix has more to do with the US new wave crossed with grungy guitars than anything else.

Shaw and Haines, also part of Broken Social Scene, move Metric into a unique direction here, with the sound building on their earlier work with more synth work and colorful production. Haines vocals belie her sound. Even though she sings in a high range and can sound delicate, her vocals are powerful and carry a lot of the songs messages through.

This release got them notice outside of Canada, and grew their touring base past Ontario. It’s well worth multiple spins – it holds up.

NOTES & MINUTIAE: Haines was born in India, but she grew up in Ontario.

IS THERE A DELUXE VERSION: Japan, Germany, and France.

GRADE: A-: Not really revivalism, but a mix of 80’s and 90’s sounds into something unique. 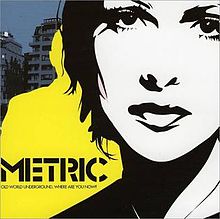 TITLE: Old World Underground, Where Are You Know?

SOME WORDS, PHRASES AND CLAUSES ABOUT THIS RECORD: At times, this release could fit in nicely in 1981 or so with the new wave era of synths and guitars, but there’s a modern twist and polish to Metric. Led by Emily Haines’ vocals and keyboards and James Shaw’s guitar work, Metric is definitely both old school and part of the 2000’s indie scene.

It’s an enjoyable romp through both old and new. Haines’ vocals, at times semi-spoken, are the forefront, and the music and arrangements complement her stylings. The synths played by Haines add some unique coloring to a few songs, and Shaw’s guitar hooks and riffs make the tracks very radio friendly while not being generic.

Metric’s gotten a lot of praise for their later work, but this is just as strong and should be on the list for any fan of the band, and of any new wave fan who wants something to remind them of the old days.

NOTES & MINUTIAE: Their US record company delayed their 2001 debut album until it was really too late, and it was finally released in 2007 (and that’s where I’ll cover it).