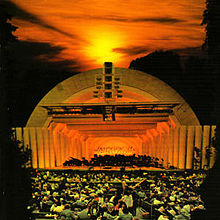 TITLE: At Dawn
YEAR RELEASED: 2001
CHART ACTION: #189 UK
SINGLES: Just Because I Do
OTHER SONGS YOU MAY KNOW: Certianly if you went to a MMJ show or have the live record.
LINEUP: Jim James, Johnny Quaid, Two Tone Tommy, J. Glenn, Danny Cash
WHAT’S IT ALL ABOUT: My Morning Jacket’s second album refines the sound, removes the massive reverb, and is full of MMJ nuggets.

SOME WORDS, PHRASES AND CLAUSES ABOUT THIS RECORD: By ddding keyboardist Danny Cash and improving the production, the second album from MMJ better illustrates James’ songs, and they sound familiar to all of those who love the band.

At times, James can get a bit ponderous and the songs don’t quite move along as they should. He and the band are still learning when too long is too long. But tracks like “At Dawn”, “Lowdown” and “X-Mas Curtain” are prime James and My Morning Jacket. The guitars in the middle of “Honest Man’ are a great improvement from the first album as well.

Really, if you like this band, and you don’t have this, get it. Those who aren’t familiar may want to go to a later one, but this is pretty darn good.

NOTES & MINUTIAE: For some reason, this isn’t on Google Play, but it is on Spotify for those keeping score. (I noted that in the What’s Missing page earlier).

IS THERE A DELUXE VERSION: The first editions of the CD and vinyl had a bonus CD of the demos for the record. Later they were released on their own along with the demos for Tennessee Fire.

GRADE: A-: You know what you’re getting if you are a MMJ fan.

TITLE: The Tennessee Fire
YEAR RELEASED: 1999
CHART ACTION: None
SINGLES: None
OTHER SONGS YOU MAY KNOW: Probably none, except MMJ freaks.
LINEUP: Jim James, Johnny Quaid, Two Tone Tommy, J Glenn
WHAT’S IT ALL ABOUT: Roots folk-rock-country amalgamation’s debut is drenched in reverb, so much so it makes it hard to hear the majesty of the songs.

SOME WORDS, PHRASES AND CLAUSES ABOUT THIS RECORD: Reverb, it’s a good thing in doses. What I really don’t like, personally, are records that are so reverb heavy that it makes it hard to listen to.

That’s the issue with this album for me. James was and is fond of reverb, and he even took to recording his vocals for this album in an empty grain silo. However, it’s just too much.

You can hear glimpses of what makes the band great and powerful in their harmonies. The songs are just as strong as the rest of the MMJ catalog. That reverb, though.
NOTES & MINUTAE: James and the rest of MMJ got together when they were in other bands performing at the same venue. James broke up his band and got together with the other three to form the band and make this album. This may seem odd, but it happens a lot.

GRADE: C+-: The songs are good and I hear the potential. I just can’t get around the production. That may be on me, but I stick with this grade. I’m exiling this.