TITLE: Nick Jonas
YEAR RELEASED: 2014
CHART ACTION: #6 US, #16 UK
SINGLES: Chains (#13 US, #1 US Dance, #79 UK), Jealous (#7 US, #1 US Dance, #2 UK), Teacher (#13 US Dance)
OTHER SONGS YOU MAY KNOW: Numb
LINEUP: Nick Jonas, Nolan Lambroza, Jason Evigan, Pierre-Luc Rioux, Nick Ruth, Nick Seely. Guest appreances by Demi Lovato and Angel Haze. A whole buncha producers and writers who may or may not have played on the record itself. I looked for ‘instrumentation’ and credited them above.
WHAT’S IT ALL ABOUT: Hooky pop songs that are ear candy for this generation.

SOME WORDS, PHRASES AND CLAUSES ABOUT THIS RECORD: Nick Jonas seems to be the one Jonas Brother really trying to establish himself as a respected solo artist in the pop music world. (Joe is trying, sorta, and Kevin is just Kevin and a reality TV guy now.) He’s doing all the right things – assembling a team of writers and song craftsmen to churn out radio-friendly pop hits and asking some friends to sing some key tracks alongside him.

The result? A pop-music confection that goes down easy and has hooks galore. In five years, this stuff will be on all of the nostalgia streaming radio stations as in “Remember the 2010’s!” or something. In 30 years, this will probably be some of the featured songs on the Jonas Brothers stage show in Branson or wherever. 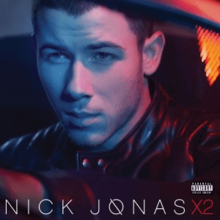 Not to say that it isn’t enjoyable as pop music. It is. I exiled only a few tracks (I don’t like the ballads – I think they’re maudlin and sloshy) but kept the rest because they don’t offend and are good to hear when you’re making pasta carbonara and you don’t want to focus on the music because you want to make sure the eggs don’t scramble when you add it to the pasta and the bacon.

NOTES & MINUTIAE: He’s released a solo album before in 2005, which, no. He also released a ‘band’ album called Nick Jonas & The Administration. No again.

IS THERE A DELUXE VERSION: Yes a deluxe edition highlighted by a collaboration with Mike Posner, and Nick Jonas X2 with remixes and a new single called “Levels” (#44 US, #1 US Dance, #46 UK) and a great remix of “Jealous” with Tinashe

GRADE: B-: No one’s going to exalt this as one of the best albums ever, but for what it is, and what it’s trying to do, it’s decent enough, with stuff like the remix of “Jealous” on X2 darn good.