TITLE: On the Threshold of a Dream

OTHER SONGS YOU MAY KNOW: Lovely to See You

WHAT’S IT ALL ABOUT: Hoo boy. A muddled album that seems to have a theme, but doesn’t except for the most part the Moody Blues are thirsty.

SOME WORDS, PHRASES AND CLAUSES ABOUT THIS RECORD: There’s some real good 60’s hippie hokum in the poems and lyrics here (“In the Beginning” is a ‘poem’ of sorts that has awful sound effects and puerile scare mongering), and that’s not the worst of it. Ray Thomas’ songs seem to be flown in from another concept album, and Mike Pinder’s “Have You Heard” and its nonsense is broken up by “The Voyage” which is an excuse for him to use his mellotron and other effects.

But most of the tracks in the middle, are, frankly, about the Moody Blues wanting to bed down some hippie chicks from London. “To Share Our Love”, “So Deep Within You”, and “Never Comes the Day” are almost embarrassing in their brazen codes for “get naked with me”, using most of the clichés of the business.

Lyrics aside (and they were supposed to be a deep group, too), the tunes themselves are memorable, with nice hooks and arrangements, and they even make the ‘love’ songs tolerable. The label also messed up and didn’t release the best pop song (and least embarrassing love song) “Lovely to See You” as a single.

NOTES & MINUTIAE: The electronic sounds at the beginning also were in the run-out groove of the second side, so you couldn’t escape them.

IS THERE A DELUXE VERSION: Yes, alternate takes and BBC sessions.

GRADE C+: I really like some parts of this record, but some of this is just too embarrassing.

TITLE: In Search of the Lost Chord

OTHER SONGS YOU MAY KNOW: Legend of a Mind

WHAT’S IT ALL ABOUT: The Moodys follow up their breakthrough with a very well arranged and played album that contains quite a bit of late 60’s philosophical hooey.

SOME WORDS, PHRASES AND CLAUSES ABOUT THIS RECORD: Ditching the orchestra and using Mike Pinder’s mellotron and Roy Thomas’ windwoods for that ‘orchestra’ feel, The Moody Blues create a well-crafted album with great pop and rock elements.

“Ride My See-Saw” is first rate, and “Dr. Livingstone I Presume”, “The Best Way to Travel”, “Voices in the Sky”, and “Legend of a Mind” are great examples of a meld of progressive ideas in rock-and-roll. They share the stage with some tracks that are a bit…outlandish…and of that time. (I’m looking at you “House of Four Doors” and “Om”).

The lyrics are definitely of a time and place. Tributes to Timothy Leary and going to another plane of conscious thought (I guess) abound. Really, it’s best to kind of realize that this was a 1968 record for 1968 heads, and enjoy the tunes for what they are.

NOTES & MINUTIAE: The title was inspired by a Jimmy Durante song.

IS THERE A DELUXE VERSION: Yes, many with bonus tracks and other content.

GRADE A-: It’s sometimes ridiculous, but mostly enjoyable, and definitely transports you to 1968, man.

OTHER SONGS YOU MAY KNOW: Not really, but you could surprise me

WHAT’S IT ALL ABOUT: A last chance record, aimed to help Decca incorporate stereo in pop music by demonstrating its classical stereo technique, turns into a defining record for the 60’s.

SOME WORDS, PHRASES AND CLAUSES ABOUT THIS RECORD: The Moody Blues changed personnel, and released a few singles with their new group to no notice. They had one last chance with Decca – make a record demonstrating their classical music “Deramic Sound” for their Deram imprint.

The group had worked up a song cycle about the day and night of an everyman, and it was this cycle that they recorded and allowed Peter Knight and his orchestra to add the classical pieces. Graeme Edge wrote two poems to begin and end the cycle (recited by Mike Pinder) and the album was complete and released. Surprisingly, it took off on FM radio in the States and became a constant seller even with the original single not doing that well.

As important as the album is (the first real progressive rock album many say), as a piece, it seems both short and bloated. The orchestral pieces fluff out the songs, sometimes to the detriment of the actual songs themselves. (Some would say the orchestral pieces are mainly fluff themselves). Meanwhile, there are only eight tracks of songs (many are combined into suites on side two) and at times those are shortchanged. Yet the quality of many of the tracks is high, especially “Forever Afternoon (Tuesday)” (listed as “Tuesday Afternoon” on the single), “(Evening) Time to Get Away”, and “Twilight Time”.

The band left their beat group roots behind (only “Lunch Break: Peak Hour” has any traces of their past), and became a leader in the progressive / psychedelic genre. This is an album to have for what it is, though as a record it’s overrated a tad.

NOTES & MINUTIAE: By 1972, when they wanted to re-release “Nights in White Satin”, it was found the masters for the record were in bad shape, so they remixed the album for use (altering it a bit) and only could restore the original mix in 2017 (by recording a pristine copy of the LP digitially).

IS THERE A DELUXE VERSION: Yes, several. One has the singles that the new version of the group recorded before this album released. They weren’t hits for a good reason.

GRADE B+: Fluffy strings, poems, and some pretension somewhat mar a decent cycle of songs. 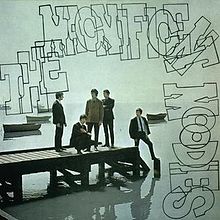 TITLE: The Magnificent Moodies (Go Now – The Moody Blues #1 in the US)
YEAR RELEASED: 1965
CHART ACTION: None
SINGLES: Go Now (#10 US, #1 UK), I Don’t Want to Go On Without You (#33 UK), From the Bottom of My Heart (#93 US), Stop! (#98 US)
OTHER SONGS YOU MAY KNOW: You probably know all but a few, since they did a lot of covers (as usual)
LINEUP: Denny Laine, Mike Pinder, Clint Warwick, Ray Thomas, Graeme Edge
WHAT’S IT ALL ABOUT: The Moody Blues start as a typical UK Beat group, with one big single, a bunch of other stuff, and what seemed to be a short, forgettable career.

SOME WORDS, PHRASES AND CLAUSES ABOUT THIS RECORD: Um, let’s cut this short. This is a quick LP job to support a hit single. It’s by a version of the Moody Blues that has really no connection, sonically, to their later material. Warwick and Laine both quite the group in 1966, and they were in a jam until Justin Heyward and John Lodge joined, and they ultimately scrapped this style (for the better). 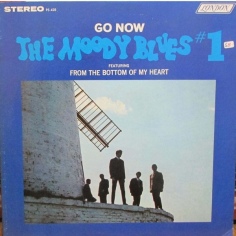 “Go Now” is a nice hit. The rest is a no-go for me. Their originals aren’t anything special, and they really aren’t a band that can cover US R&B.

NOTES & MINUTIAE: Laine, of course, was Paul McCartney’s foil in Wings in the 70’s.

IS THERE A DELUXE VERSION: Yes, combining the UK and US versions with other singles and tracks. Listen to their version of “Time Is on My Side” versus the Stones’ version and see what you think. Some of the bonus tracks are decent, like a re-mastered version of “Go Now”.

GRADE: D+: This is the way albums used to be made for groups with their first hit. I wouldn’t even have reviewed this, except I know people may be interested because it’s the “Moody Blues”. I just wanted to warn folks. The bonus cuts would have made this a C-, but no better.