TITLE:  Maximum Rocknroll (E is for Everything)

SINGLES: None, two EPs and a demo LP are covered here

OTHER SONGS YOU MAY KNOW: Fans do.

WHAT’S IT ALL ABOUT:  Early collection of NOFX. Fans only.

SOME WORDS, PHRASES AND CLAUSES ABOUT THIS RECORD: NOFX are punk lifers, and right now they don’t care if you like them or not. They didn’t then either.

Before they matured and became the band people know now, they were rough and tumble punk rockers carrying on the banner of the Descendents and the Germs. Basic chords, snotty humor and short songs. The recording quality is variable – especially since some were demos. 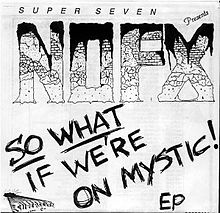 A compliation of two early EPs and a demo, this really is for those who are NOFX fans and want to know their origins. Otherwise, you may wanna stick to the 90’s stuff.

NOTES & MINUTIAE: Originally this was released without their knowledge.

GRADE: C: Maturity does help, even in punk rock.