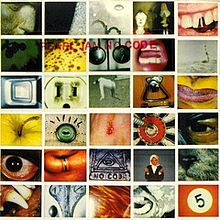 OTHER SONGS YOU MAY KNOW:  Red Mosquito, Sometimes

WHAT’S IT ALL ABOUT: Pearl Jam changes course a bit, and makes a more personal and varied record, which confounds some fans and radio programmers.

SOME WORDS, PHRASES AND CLAUSES ABOUT THIS RECORD: Anyone expecting Pearl Jam to come roaring out with a huge statement in the first song on their fourth album must have been surprised and shocked to hear the moody “Sometimes” as the lead cut. That was a sign of things to come.

While No Code had some of their trademark alterna-hard rock, the album changed up styles more than any other Pearl Jam release, even in some songs (like “Present Tense”). They also dabble in hard core in a tribute to Mudhoney and Melvins bassist Matt Lukin and also in spoken word and exotic rhythms. Some fans expecting a wall-to-wall record like the first two, were just as surprised as they were with some of the odder cuts in Vitalogy.

This even had a sung by Stone Gossard (“Mankind”), a big curveball. 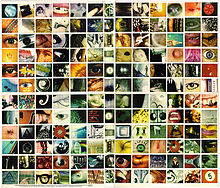 There’s plenty of good stuff here – plenty of classic Pearl Jam sounds. I think people were expecting one thing and were delivered another, as the songs and performances themselves are pretty good.

GRADE: A-:  While it doesn’t have a certified classic song, the album is varied, and has aged pretty well due to its variety of sounds and subjects. 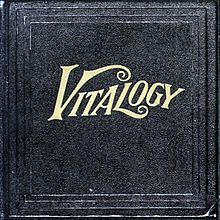 OTHER SONGS YOU MAY KNOW: Last Exit, Nothingman, Corduroy

WHAT’S IT ALL ABOUT: Pearl Jam broke out of the mold everyone put on them, and put out an album with varied textures, and experiments that’s mostly successful but has a couple big flops.

SOME WORDS, PHRASES AND CLAUSES ABOUT THIS RECORD: Most all of the songs here are winners, and stay with you forever. “Not for You” and “Better Man” are among the best songs of the 90’s, and “Spin the Black Circle” is a furious tribute to 45s. The other cuts, such as “Last Exit” and “Tremor Christ” are fantastic too.

The band wanted to do some experimenting, though. “Bugs” is just silliness, “Pry, To” a throwaway, and then there’s “Stupid Mop” or whatever it is, which just wastes everyone’s time for over 7 ½ minutes.

That last cut almost ruins the record, making the greatness before a bad trip. Of course, you can delete it now that you’re streaming, but still, it’s a downer and downgrades the record a notch. Still, it was nice to see Pearl Jam try to break away from preconceived notions and succeed.

NOTES & MINUTIAE: The CD case was elongated and made it hard to fit into the standard CD holders and racks of the time. Remember that?

IS THERE A DELUXE VERSION: Yes. Three alternate takes and demos

GRADE: A-:  Sadly, the experiments downgrade a potential A or A+ record. 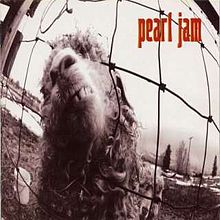 OTHER SONGS YOU MAY KNOW: Glorified G, Elderly Woman Behind the Counter in a Small Town

WHAT’S IT ALL ABOUT: Second album from the Seattle band finds them not wanting to remake their debut, which makes it for a stronger album but displeases some. 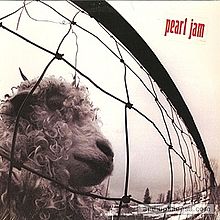 SOME WORDS, PHRASES AND CLAUSES ABOUT THIS RECORD: Fans looking for Pearl Jam to become another pure alt-rock band were a bit disappointed by this, but in reality they were only ‘alternative’ to begin with because they weren’t hair metal and wrote songs and lyrics that were personal and earnest.

NOTES & MINUTIAE: They recorded the album one song at a time, finishing each mix as the recordings were complete.

IS THERE A DELUXE VERSION: Yes, several re-issues with rarities and live cuts.

GRADE: A: Hearing this album again, I underrated it in 1994. I think it’s stronger than their first cut for cut. It definitely doesn’t have a lull. 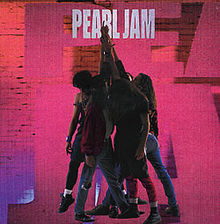 OTHER SONGS YOU MAY KNOW: Possibly all of it, but Black went to #3 on the Mainstream Rock and #20 on the Modern Rock charts without being issued as a single.

WHAT’S IT ALL ABOUT: Debut album from band formed from the detritus of Mother Love Bone, and it becomes accidentally iconic for a scene.

SOME WORDS, PHRASES AND CLAUSES ABOUT THIS RECORD: I really don’t know if Pearl Jam was ever really trying to be grungy or alternative. Gossard and Ament had their run in Green River as a punkish band, but Mother Love Bone was more glam than anything. They just happened to be in Seattle, playing guitar oriented rock without trying to look or sound like hair metal, and thus ‘grungy’.

This album did take a while to hit, and it took touring to do so, but when it hit, it became a signpost for Seattle. Frankly, there’s nothing really edgy or alternative about the album. What it is are many straight, basic rock songs, mostly in mid-tempo, sung by a vocalist that eschewed the high notes and the glam posturing. Ok, maybe they were a BIT alternative in that way.

As a rock-and-roll album, it’s good with some great songs. It’s not the best debut of all time as some say. My issue is that there’s a few too many mid-tempo songs and they wreck the pacing a little bit toward the end. The last few cuts aren’t strong after “Jeremy” and it just meanders to an end. Still, “Even Flow” is an all-timer and I’m even warming now to “Black”. (I really didn’t like it when it came out). But it’s a pretty solid debut, even if it put them in a category where I don’t think they really belonged anyway.

NOTES & MINUTIAE: As you probably know, they were called Mookie Blaylock before settling on Pearl Jam (unfortunately – and that ended my dream of naming a band after former University of Texas forward Locksley Collie).

IS THERE A DELUXE VERSION:  Yes. A new mix, b-sides and outtakes galore. Happy hunting for all the versions!

GRADE: A-: About 15 years ago I probably would have given this a “B” but I’ve warmed to many of the songs now. The back end is still slow for me though.