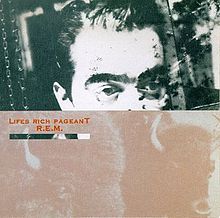 OTHER SONGS YOU MAY KNOW: Cuyahoga, I Believe

WHAT’S IT ALL ABOUT: REM changes its sounds and style in many ways – making a crunch harder-rock album with clear vocals.

SOME WORDS, PHRASES AND CLAUSES ABOUT THIS RECORD: After several years of similar sounding songs (jangly guitars, mumbled vocals), REM breaks out of its box, and revs up their rock-and-roll influences.

On many songs, Peter Buck’s guitars roars with power chords and feedback and Bill Berry hits the drums with fury. The biggest change is Michael Stipe’s vocals. For the most part, they’re clear and you can hear every word. The meaning and lyrics are still oblique, but you can pick out what he’s saying. Only on a couple tracks does the band soften and slow down, and even on “The Flowers of Guatemala” Buck’s guitar gets loud and insistent at the end.

Track-for-track, this is their strongest record since their debut and creates a sound that would carry REM into the future.

NOTES & MINUTIAE: Because they’re REM, the track list of the back of the album is all mixed up and the closing track on each side isn’t listed.

IS THERE A DELUXE VERSION: Yes, one with bonus tracks and another with demos for their 25th anniversary.

GRADE: A:  A fantastic record and a welcome change of pace. 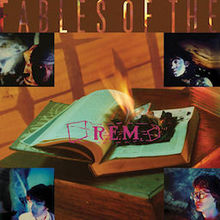 TITLE:  Fables of the Reconstruction

OTHER SONGS YOU MAY KNOW: Feeling Gravity’s Pull, Maps and Legends

WHAT’S IT ALL ABOUT: Moody, dark album changes things up a bit for the group, but some of the songs are the weakest of their output so far.

SOME WORDS, PHRASES AND CLAUSES ABOUT THIS RECORD: I remember, after playing this album a few times, being disappointed by some of the tracks, as they were too dark and murky and at times impenetrable. I still think that about some of the tracks but a few have moved into my personal favorites for the group.

It’s an album full of eccentric people and visions, and the opening two tracks (“Feeling Gravity’s Pull” and “Maps and Legends”) are fantastic songs that you really need to work through, but once the light hits, you have it. Yet, some of the character studies and expressionistic songs just don’t do as well as the others.

The band got a couple of great college radio hits and some more play on MTV, setting the stage for their commercial move forward. It was a bit of an artistic retreat, or perhaps a re-calibration.

NOTES & MINUTIAE: This was recorded in London, and is the only REM album recorded outside the US

IS THERE A DELUXE VERSION: Yes, a big ol’ deluxe with B-sides, outtakes and a whole live set.

GRADE: B: As I said, I like many of the songs, but I’m not enamored with some and the album as a whole piece of work. 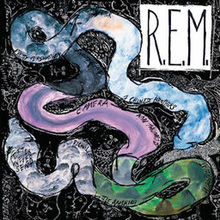 OTHER SONGS YOU MAY KNOW: 7 Chinese Bros., Pretty Persuasion

WHAT’S IT ALL ABOUT: Second full length from the Athens band moves a bit forward from their fantastic debut towards a more rock oriented sound, but the overall songs aren’t as strong.

SOME WORDS, PHRASES AND CLAUSES ABOUT THIS RECORD: While Pavement once said “Time After Time / is my least favorite song”, I think that’s a matter for discussion on this album. Of all of the songs on Reckoning, that one seems to have most of the elements of their debut (that and “Letter Never Sent” could have fit in with Murmur, sound wise, but aren’t that strong).

This second album isn’t a slump from their classic debut, as the first side is fairly strong with some absolute REM classics. The second side wobbles a bit, with some secondary material that are either very similar to other songs or just not as cohesive.

Of course, a second-rate REM song at this time was better than almost every other bands top songs, so this is still a darn great album. Just not up to the standards of the debut.

NOTES & MINUTIAE: One of the iconic songs on the album, “Pretty Persuasion”, was an older tune that producers Don Dixon and Mitch Easter had to convince them to record.

IS THERE A DELUXE VERSION: Yes, a couple of editions featuring outtakes, alternate cuts, live tracks, you name it.

GRADE: A-: It’s no Murmur, but what is? There’s still a bunch of great, classic tracks here. 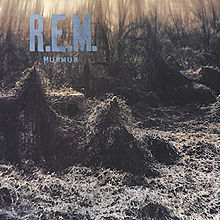 SOME WORDS, PHRASES AND CLAUSES ABOUT THIS RECORD: This album may have changed the course of music in the 1980’s, especially for the independent and college radio minded listeners. The mysterious lyrics and vocals, the sprawling, shimmering guitars, and the lack of flashy guitar solos that were unleashed here spawned an entire industry, as it were, of bands that tried to replicate the formula.

Of course, since they were from Athens, like the B-52s and Pylon, they created a land rush for bands from that area, even though R.E.M. (and all the Athens bands) were unique.

Musically, this phase of R.E.M. is what I’d call the ‘classic’ sound, ringing guitar runs, big melodic bass, and obscure, muffled vocals with obtuse lyrics, and a certain chemistry that great bands have when they’re all working together. The songs are tight and arranged well, and the production allows the band to breathe and explore.

NOTES & MINUTIAE: I.R.S wanted to use another producer besides Mitch Easter, and the version of “Catapult” that producer recorded horrified the band (keyboards were added, a click track was used, etc.).

IS THERE A DELUXE VERSION: Yes – plenty of reissues with bonus tracks and live shows.

GRADE: A+: A stone-cold classic. 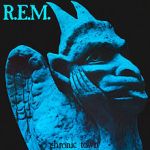 SOME WORDS, PHRASES AND CLAUSES ABOUT THIS RECORD: Contemporary reviews and comments about this EP all contain words like “arcane, intriguing, complex, eccentric.” Really, it’s R.E.M. in a nutshell.

The five songs on this release are a perfect introduction to R.E.M. and are some of the most loved by hardcore fans. “Wolves, Lower” and “1,000,000” are personal favorites of mine, but each of the cuts have moments of wonder and mystery.

They went on to big, big things and this was a great start.

NOTES & MINUTIAE: EP’s are usually the most disposable medium – they go out of print easily. IRS added the EP to an odds-and-sods collection and that’s how many fans first heard it.

IS THERE A DELUXE VERSION: No but as stated above the EP became a deluxe version of Dead Letter Office

GRADE: A : It’s an almost perfect EP and really what the format is about