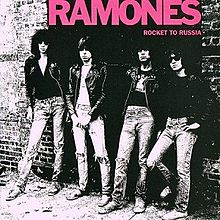 WHAT’S IT ALL ABOUT:  An actual hit record! Well, a minor hit but Top 50 albums aren’t anything to sneeze at.

SOME WORDS, PHRASES AND CLAUSES ABOUT THIS RECORD: After a couple of great records, the Ramones made what many consider their magnum opus. A cleaner sound, some additional chords, a few songs not just hard-and-fast, and a lot of fun made this the album of 1977, sales be damned.

From the opening cut (“Cretin Hop”), through the singles, and the album cuts tender (“Here Today, Gone Tomorrow”), nihilistic (“I Don’t Care”), and fun (“We’re a Happy Family”), this is a record for any rock fan. It’s also a value proposition with 14 cuts, with almost every cut a classic or near-classic.

The band also continued to show their love for old rock-and-roll with covers of “Surfin’ Bird” and “Do You Wanna Dance”.

This was on a trajectory to be a big hit, but then the Ramones were lumped into the ‘troubling’ punk rock genre in the UK (thanks Sex Pistols) and it stalled. But it’s still a great ride.

IS THERE A DELUXE VERSION: Yes. Some live cuts, B-sides and demos.

GRADE: A+: If you buy just one Ramones album (and you must), buy this. 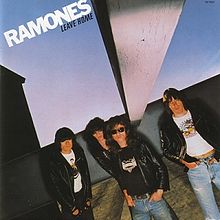 SINGLES: I Remember You, Swallow My Pride (#36 UK)

WHAT’S IT ALL ABOUT: Second album, same as the first? Pretty much.

SOME WORDS, PHRASES AND CLAUSES ABOUT THIS RECORD: Sure, this album’s not AS good as their debut, but most of the songs aren’t played ad nauseum, and they do change gears a couple of time and get almost tender or something. It’s a pop album for the most part, but in a Ramones way, which is cool in of itself.

The cover of “California Sun” may be the best cover version they’ve ever done. It’s both respectful of the original, but gives it the Ramones treatment which almost steals the song from the original.

If you think the Ramones are played out, this album, while containing some lesser cuts, will bring you around to them again.

NOTES & MINUTIAE: “Carbona Not Glue” was pulled off the album after the first printing thanks to the makers of Carbona raising a ruckus. It was replaced with the single “Sheena Is a Punk Rocker” in the US (which also is on their followup album) and “Babysitter” in the UK. Now, the streaming copies have the right song.

IS THERE A DELUXE VERSION: Yes! Bonus cuts, demos and a whole live performance at the Roxy.

SINGLES: Blitzkrieg Bop, I Wanna Be Your Boyfriend

OTHER SONGS YOU MAY KNOW: You either know all of the record, or you don’t

WHAT’S IT ALL ABOUT: While it’s not really the first punk rock record, it became a touchstone of some struggling bands in the UK. Here in the US it was a sign that ‘real’ rock and roll was supposed to be fun, and stupid, and easy to play, and fun.

SOME WORDS, PHRASES AND CLAUSES ABOUT THIS RECORD: Today, there would be some ‘problems’ regarding the lyrics of some songs regarding violence, drug use, hustlers and Nazis. I really don’t think anyone in 1976 or 1977 took this record seriously except for the fun it was. To this day, it sounds like a breath of fresh air – except “Blitzkrieg Bop” which unfortunately has been used and played ad nauseum in commercials and sporting events, and that over playing was about 30 years too late, really. Seriously, if you haven’t heard the whole record, what’s your problem?

Not every song has three chords. “Let’s Dance” and “Loudmouth” may have as many as six. That’s a lot of bass strings Dee Dee had to pluck! (Johnny just went with barre chords, of course).

NOTES & MINUTAE: You may notice the stereo effect – in that the bass is in one channel and the guitar is in the other. That’s a big tribute to the early Beatles stereo, where they did it that way for ease. I’d love to hear this album remixed for mono.

IS THERE A DELUXE VERSION: Yes, there is one with some demos and outtakes. However, the demos really sound like the original songs – so they’re kind of superfluous.

GRADE: A. Not quite an A+ as some of the material isn’t their strongest. Still it’s a hell of a record.