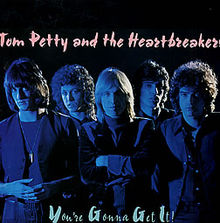 TITLE:  You’re Gonna Get It!

OTHER SONGS YOU MAY KNOW: Magnolia

WHAT’S IT ALL ABOUT: Second album from the rootsy band has some decent songs and a straightforward sound. It’s awfully short and sometimes slight.

SOME WORDS, PHRASES AND CLAUSES ABOUT THIS RECORD: Tom Petty had a short, tight group of 10 songs for his band’s next albums. There are some real winners, like the two best known records (the singles, which didn’t chart that high but was always big on the radio), and “When the Time Comes” and the title track.

It seems a bit like their record company, Shelter, needed to get product out there, so with less than a half hour of material they put this out. It’s not out of the ordinary for any other early Tom Petty album – just poppy rock-and-roll. Even with just 10 tracks, there are a few less-than-stellar tracks.

Even though you know the hits, some of this would still sound fresh to me.

GRADE: B-:  If there was more of it, or was more consistent, the grade would be higher.

SOME WORDS, PHRASES AND CLAUSES ABOUT THIS RECORD: As you may know, Mudcrutch split apart after one single, so contact in hand, Petty was left with a record deal and no band. He picked up the pieces, grabbed Blair and Lynch to add to Campbell and Tench, who stayed with Petty. This album was the result of their first efforts in the studio.

The Tom Petty sound was in full effect already, some country leanings, some folk-rock nods (especially to the Byrds) and some southern / swamp rock influences, but a sound that’s rather distinctive. Two of the three singles featured here are played all the time on the radio, which is funny since one never charted, and the other had to be re-released to hit the verrrry bottom of the Top 40.

The album cuts are all distinctive and not formulaic – but all unmistakably sound like Petty. It’s a solid record which the only quibble I really have is sequencing is a bit off. The opening cut doesn’t announce their presence with authority. Some of the cuts don’t quite have the polish but it’s a fine first effort.

NOTES & MINUTIAE: Believe it or not, the US didn’t notice this record at all when it was first released. The UK started playing “Everything That’s Rock ‘n’ Roll” and finally, after about a year, they started to get traction. Go figure.

GRADE: B+: There’s nothing wrong here at all. It’s a pretty solid debut with just a few rough edges and sequencing issues.