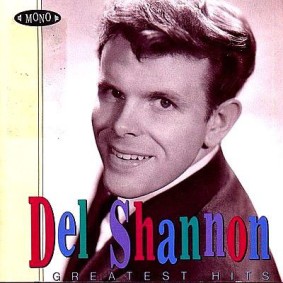 OTHER SONGS YOU MAY KNOW: Stranger in Town, Handy Man, Do You Wanna Dance

LINEUP: Del Shannon and session players. Max Crook was the inventor and player of the Musitron, which gave Shannon’s records that neat keyboard sound.

WHAT’S IT ALL ABOUT: An unlikely pop star for the early 60’s, as he was almost 27 and wrote his own songs, Shannon deserved more accolades for his entire work, but Runaway is still an all-timer.

SOME WORDS, PHRASES AND CLAUSES ABOUT THIS RECORD: Del Shannon met Max Crook in 1959, and together the two changed rock music for good in 1961 when they struck gold with “Runaway” featuring Crook’s Musitron as a lead instrument. The Musitron was arguably a synthesizer and that keyboard sound helped widen the sound of music besides simple piano or organ.

Besides “Runaway”, Shannon had a decent pre-Beatlemania career in the US, and a longer stretch of hits in the UK (where the Beatles were big fans). But as time went along, Shannon fell out of favor despite embracing psychedelic pop for a couple of fine late 60’s records.

This collection has all of the early 60’s high points and shows that Shannon’s songwriting had some depth (even if the Musitron solos all were similar in his early stuff), with the only nit to pick was the anonymous and very white female backup singers. He later had alcohol and depression issues, and took his life in his mid 50’s even as he was being considered to replace Roy Orbison in the Traveling Wilburys.

NOTES & MINUTIAE: He was the first US artist to cover the Beatles, as his version of “From Me to You” which hit #77 in the US (and was the flip to a hit in the UK).

IS THERE A DELUXE VERSION: The Rhino version isn’t streaming, but there is one streaming that adds on three later songs instead of the final three tracks. You take what you can get.

GRADE B+: “Runaway” is an all-timer, and some of his other hits are must have for your collection.