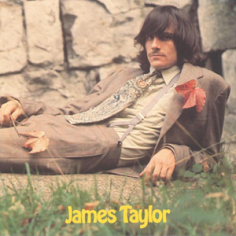 SINGLES: Carolina On My Mind (#118), Knocking ‘Round the Zoo, Something’s Wrong

OTHER SONGS YOU MAY KNOW: Something In The Way She Moves

LINEUP: James Taylor, Mick Wayne, Louie Cennamo, Freddie Redd, Don Shinn, Bishop O’Brien. Paul McCartney and George Harrison guested on one track. Richard Hewson arranged all the strings so you can blame him for those.

WHAT’S IT ALL ABOUT: Debut album on Apple Records didn’t sell and wasn’t promoted well. But it had a few lasting tracks, and others almost ruined by string interludes and syrup.

SOME WORDS, PHRASES AND CLAUSES ABOUT THIS RECORD: After failing to hit the big time with his band (called The Flying Machine – no, not that one), Taylor was signed as a solo artist on Apple Records after auditioning for Paul McCartney and George Harrison. Harrison nicked the first line of “Something” from a Taylor track.

When Taylor plays along with the studio musicians, and without the orchestra, it’s a perfectly nice folk-rock record. A track like “Taking It In” shows some liveliness and uses a harpsichord along with a nice bassline and acoustic guitar, while Mick Wayne’s lead in the opener “Don’t Talk Now” is strong.

BUT – dang it – Peter Asher and Richard Hewson added string interludes and a lot of syrup on tracks and in between tracks as interludes. Those wreck the continuity and detract from the intimacy of the record. Ack!

IS THERE A DELUXE VERSION: A few demos and a B-side were appended.

GRADE  B-: I can rescue a few tracks from this, if I can somehow zap the string interludes.