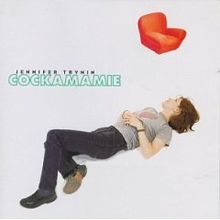 OTHER SONGS YOU MAY KNOW: Not really, unless you knew me then.

WHAT’S IT ALL ABOUT: Boston based solo artists records a rockin’ alternative power pop-ish solo album with great songs and no reaction from the public for the most part.

SOME WORDS, PHRASES AND CLAUSES ABOUT THIS RECORD: Coming out of Boston, Warner Brothers released this album after local Squint Records put it out to raves in 1994. It deserved the accolades – it didn’t deserve the commercial freeze-out.

MTV played the video for “Better Than Nothing” at times, and that garnered some airplay. Yet the album has several great tracks like “One Year Down”, “Too Bad You’re Such a Loser”, “Knock Me Down and “Happier”. Her guitar tone is fantastically meaty and raw, which adds to the overall sound and mood. The production and her work with the rotating drummers is strong as well.

There are few dull spots or subpar tracks. It’s just a shame it didn’t resonate with the public or radio.

GRADE A+: Unfairly ignored by the powers that be, it deserved a lot of play.