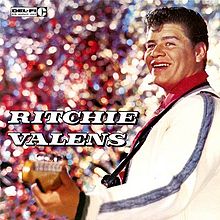 SOME WORDS, PHRASES AND CLAUSES ABOUT THIS RECORD: After just a couple of released singles, Valens’ lost his life in the infamous Clear Lake plane crash, along with Buddy Holly and the Big Bopper. These recordings were in the can already at Gold Star, and Del-Fi released them just a month after his death at the tender age of 17.

It’s clear that Valens had talent. Over half on this album was written or co-written by him, and while there’s some fluff, the hits more than make up for it.

Since his output is so small, this album may be the one to get.

NOTES & MINUTIAE: During the ill-fated Winter Dance Party tour, he filled in as drummer for Dion and the Belmonts.

GRADE: B-: He didn’t have much time to develop a repertoire. You may just need the hits and noticeable songs when all is said and done.