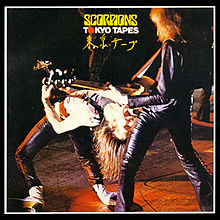 OTHER SONGS YOU MAY KNOW: Maybe, if you’re a fan of early Scorps

WHAT’S IT ALL ABOUT: Capping the Uli Jon Roth album with a double live in front of an adoring fan base in Japan, the Scorps play their hits, and indulge in double-live album excesses. It was the 70’s.

SOME WORDS, PHRASES AND CLAUSES ABOUT THIS RECORD: The double live album. What would rock fans in the 70’s do without it? This one is perfect to check out the various Scorpions’ 70’s tracks that are scattered over several compilations.

The Scorpions iteration with Uli Jon Roth was a little more arty as Roth liked to extend songs with guitar solos. The bad news is that Roth also sang a few tracks, and he’s no Klaus Meine. Not even close. His vocals kill “Polar Nights”, but dang he can play. 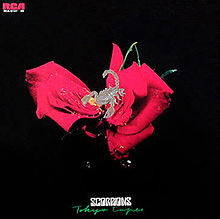 There are some indulgences (of course), including two covers of old rock songs and an old Japanese song, along with a lot of soloing (including a drum solo in “Top of the Bill”). Still, this is a prime collection of 70’s Scorpions.

NOTES & MINUTIAE: The first re-issue of the CD left off “Polar Nights” since they wanted it on one disc.

IS THERE A DELUXE VERSION: Yes, they restored “Polar Nights” and added more live tracks, including the Japanese anthem and four repeat tracks from another show.

GRADE B: It’s a 70’s live double, so it is long and indulgent. But it’s still a good overview and the playing is great. 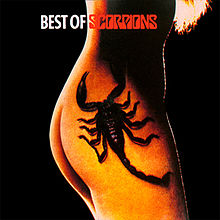 OTHER SONGS YOU MAY KNOW: Maybe?

LINEUP: Klaus Meine, Rudolf Schenker. Most cuts had Uli Jon Roth and Francis Bucholz. Michael Schenker was on one track and wrote others. Herman Rarebell, Wolfgang Dziorky, Rudy Lenners, and Jurgen Rosenthal were the drummers (among others).

WHAT’S IT ALL ABOUT: Mishmosh of compilations cover the RCA years for the Scorpions. 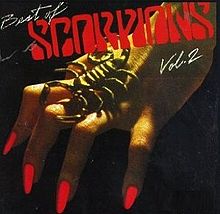 SOME WORDS, PHRASES AND CLAUSES ABOUT THIS RECORD: The Scorpions, Germany’s longest lasting hard rock / metal band, had two decades where they were one of the best known bands in Europe, and built a fan base over the years in the US that resulted in a mid-80’s explosion before throwing it all away in the late 80’s with a turn towards more pop than metal.

Their 70’s catalog, featuring Uli Jon Roth on lead guitar (for the most part) mixed prog elements with hard rock, and Roth was an inventive guitarist adding surprising elements to the mix. While they had questionable taste in record covers (they blamed RCA for the most part – and one album shut down Wikipedia for four days in the UK at one point), and their albums weren’t so consistent track-for-track, the best tracks definitely stand up.

YET – their 70’s streaming is a mess. Three full albums are streaming, and the comps are EXCEPT for one song – the killer “He’s a Woman – She’s a Man”. The seminal live album Tokyo Tapes is finally streaming (in 2018) 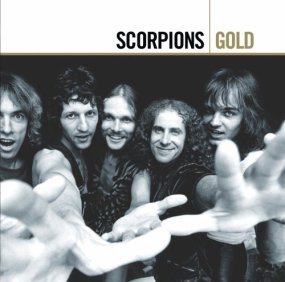 The comps don’t replace the full albums in a sense to get what the Scorps were about in the 70’s, but they have to do for now. And someone explain to me why “He’s a Woman…” isn’t streaming.

NOTES & MINUTIAE: Michael Schenker was on their first album before UFO scooped him up and they got Uli Jon Roth. Roth left after Tokyo Tapes so these comps encapsulate that era. Gold is mixed with both RCA and EMI recordings.

GRADE: B: Each of the comps isn’t perfect. You could Frankenstein the best cuts for yourself, and there’s enough to do so. But damnit, stream the whole albums guys.