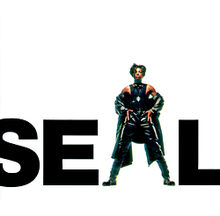 OTHER SONGS YOU MAY KNOW: That’s over 1/2 of the record

WHAT’S IT ALL ABOUT: Contemporary soul / R&B / dance record shows off Seal’s vocals with some well written and well produced songs.

SOME WORDS, PHRASES AND CLAUSES ABOUT THIS RECORD: Trevor Horn showed he still had an ear for sound, and songs, when he produced this, Seal’s debut album. Seal had written or co-written several tracks that all could have been hit singles or dance club favorites, and Horn crafted them into a pleasing but interesting record.

Seal’s vocals work on both the panty-droppers and the up-tempo numbers. He’s got a natural gift of voice, and his songs are varied enough to provide a listening experience that doesn’t wear on you or get old.

It was the beginning of a long-lasting career for the singer, and the debut still could be released today and do well on the charts, thanks to Horn’s production.

NOTES & MINUTIAE: The first hit, “Crazy”, was written as the world was changing in 1989. Also, “Killer” was used on the soundtrack of the NBC show Homicide: Life on the Streets.

IS THERE A DELUXE VERSION: A couple of versions – one is kind of a rush-release and the other has longer mixes on two songs. I think the latter is what is streaming..