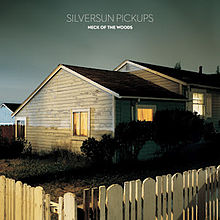 TITLE: Neck of the Woods

WHAT’S IT ALL ABOUT: More atmospheric alternative rock with all kinds of sonic tricks in the mix, and a few tracks change up their normal mode.

SOME WORDS, PHRASES AND CLAUSES ABOUT THIS RECORD: The Silversun Pickups are still moody, atmospheric, and have a to-die-for guitar sound. But as they mature, their songs are getting more complex. On this, their third album, they don’t rely on their same song structures as they have in the past.

Now, tracks have definite discrete sections, tone and tempo changes, and production that evolves during the track to emphasize the mood and feel of the song. And while there are stretches that could put you into torpor, the changing tones snap you out of it.

The Pickups never sound stale, but they do have a tendency to elongate their songs on occasion. Here, nothing is shorter than 4:39 and one stretches to almost seven minutes. That’s the one drawback here – sometimes they seem like their filling time with their intros and outros. Still, this record moves them forward.

GRADE B+. Some tracks linger on too long, but overall this record is still quality.

WHAT’S IT ALL ABOUT: A more atmospheric album than their debut, adding layers of textures and sonic ephemera to build the songs.

SOME WORDS, PHRASES AND CLAUSES ABOUT THIS RECORD: Not contend to reproduce their debut, the Silverun Pickups went into the studio with a collection of more mature songs that they then built into layered, moody tracks that enhanced their basic sound.

Brian Aubert’s voice is perfectly suited for this – his whispery, gentle tenor lies above the texture yet not overpowering it. His guitar work is still solid – using the Billy Corgan setting many times on his axe. The rest of the band settles in and knows their place, though the studio musicians, strings, and other production sometimes limits their effectiveness.

The record does have tracks that seem to run out of steam, and with all tracks between 4:40 and 5:54 in length there’s a tendency for them to run together. But this record shows the band moving forward, enhancing their sound without falling into formula.

NOTES & MINUTIAE: They had a song on The Vampire Diaries soundtrack and released a three-son outtakes EP in 2010.

GRADE A-. This build on their success and enhanced their sound with little problem 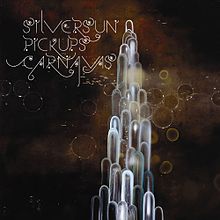 OTHER SONGS YOU MAY KNOW: Future Foe Scenarios, Dream at Tempo 119 both got some airplay.

WHAT’S IT ALL ABOUT: Full length debut from Southern California band that combines several genres and make it their own.

SOME WORDS, PHRASES AND CLAUSES ABOUT THIS RECORD: The first thing I noticed was the guitar sound – which reminded me of the Smashing Pumpkins. But on closer reveal, the guitar also had elements of shoegaze and other elements of other movements in it. Plus the songs sound dreamier, a la the shoegazers.

This isn’t shoegaze though. It’s a unique sound. The lazy sounding vocals and distorted haze sound sleepy, but there’s a great buzz and somewhat of a joy to listen to. The melodies are seductive and worm their way into you head.

Some of the tracks get a bit long, but they all work. It’s a great debut; a new sound for the mid-00’s which desperately needed it.

IS THERE A DELUXE VERSION: Two bonus Japanese tracks.

GRADE: A: It’s a great record, and something the scene definitely needed (and still needs).

TITLE: Pikul
YEAR RELEASED: 2005
CHART ACTION: None
SINGLES: It was an EP
OTHER SONGS YOU MAY KNOW: They made videos for Kissing Families and Comeback Kid
LINEUP: Brian Aubert, Nikki Monninger, Joe Leter, Christopher Guanlao
WHAT’S IT ALL ABOUT: Debut EP from the Silver Lake (a neighborhood of LA), California band sets the stage for their career, though it is a bit uneven.

SOME WORDS, PHRASES AND CLAUSES ABOUT THIS RECORD: Somewhat distorted guitars, high pitched vocals, female bass player, are they aping the Smashing Pumpkins? No, not really. The guitar sound is similar but the songwriting and songs are different.

This debut EP from Silversun Pickups shows how well-formed the bands sound and vision was already before walking into the studio. The lead two cuts (“Kissing Families” and “Comeback Kid”) are a bit retro-90’s with some modern flourishes, and that’s right where this band sweet spot is. The guitars sound familiar, yet the songs have a quiet, hushed tone at times thanks to Aubert’s vocals (a little shoegaze in there as well).

The band was together as this unit since 2002, which gave them time to work everything out and put their best foot forward as a group. Some songs, the slower ones, aren’t as essential and vital as the lead cuts, and one (“Creation Lake”) stops the record dead in its tracks. But it’s a good debut EP and their next album would show how vital of a group they are.

NOTES & MINUTIAE: The title is pronounced “Pie-kull”. The CD version had a bunch of silent tracks from track six to the ‘hidden’ track.

GRADE: B+: Two great songs, the rest good except for one, and that one track knocks it down a peg. Harsh, but true.