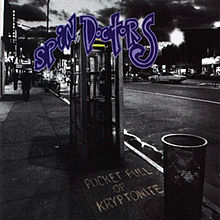 OTHER SONGS YOU MAY KNOW: A lot of people bought this, but I doubt if many of those could recognize the filler

WHAT’S IT ALL ABOUT: Benign jam band hits it big, and backlash ensues almost immediately.

SOME WORDS, PHRASES AND CLAUSES ABOUT THIS RECORD: The Spin Doctors were definitely a jam band – live they could noodle on and on and on, but some of their material worked as shorter rock /pop songs (sort of a jam band lite). Some of their material doesn’t work so much in this milieu, though, as they’re mainly sketches of songs meant for jamming over.

The personality of the group comes from lead singer Chris Barron, a happy sounding pothead, though bassist Mark White adds some elements of funk and soul to the mostly generic jam band riffs and solos.

Several songs start with similar riffs or drum lines, so much that it takes a little bit to recognize the actual song, which probably added to the burnout factor of casual fans. If this album had been a modest seller and not take over MTV, it may be remembered more fondly.

NOTES & MINUTIAE: They had released a live album before this. It’s not streaming but many of the tracks wound up on their next live album anyway.

GRADE: B-: It (and they) have a bad rap, but the album’s just OK with just a few standouts, and a lot of same-same or song skeletons.