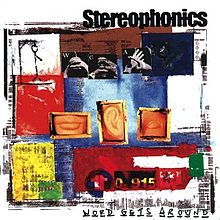 SOME WORDS, PHRASES AND CLAUSES ABOUT THIS RECORD: It’s just a rock and roll album, but after Oasis, what else rock was there really in the UK (Blur is something else) in 1997. This is a decent debut record that sounded good on the radio, thus it garnered some airplay and some hits.

All in all there’s nothing too special about this album. The songs are decently written and the performances are tight with some ragged vocals (just as they wanted it). I’d say that this is a record to put on when you want your fix of a more modern UK rock sound and don’t want to really challenge yourself. The only downer is the last track, a moody ballad. At this point they don’t ballad well.

NOTES & MINUTIAE: They had originally demoed some of the songs on this album in 1992.

IS THERE A DELUXE VERSION: Yes

GRADE: B-: I’ve heard a lot worse, especially from modern acts. This is pleasantly OK.