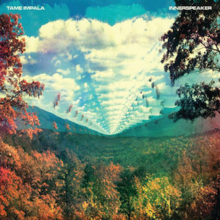 SINGLES: Solitude Is Bless, Lucidiy, Expectation, Why Don’t You Make Up Your Mind

OTHER SONGS YOU MAY KNOW: Desire Be Desire Go was the lead track on their (his) EP

WHAT’S IT ALL ABOUT: Australian multi-everything channels the acid and psychedelic rock of the 60’s to near perfection.

SOME WORDS, PHRASES AND CLAUSES ABOUT THIS RECORD: After an EP and a single set some tastemakers aback with the back-to-the 60’s psychedelic vibe, Tame Impala (really Australian Kevin Parker and some friends helping here and there) released their debut album. It really channels the psychedelic era with fuzzed out guitars, echoey vocals that sound like their through a Leslie, and just a fabulous sound all together.

Sounding like John Lennon singing in a canyon, Parker’s vocals hearken back to the 60’s, as does his instrumentation. But there’s something modern sounding as well. The production is excellent, and the use of a breadth of sounds and studio effects make this a homage instead of a straight copy.

While the album loses steam a bit at the end, it’s still a fabulous record, and reminds one of a psychedelic Todd Rundgren since he did almost everything himself.

NOTES & MINUTIAE: The self titled EP and the “Sundown Syndrome” single are streaming. There was also a 2008 EP with three songs and three remixes, though two carried over. The streaming of the 2009 EP just has four of the six tracks, since one is on this album and the other was cut.

IS THERE A DELUXE VERSION: There is an EP with B-sides streaming separately.

GRADE A-: A great tribute / homage to the psychedelic sound from a modern studio hound.